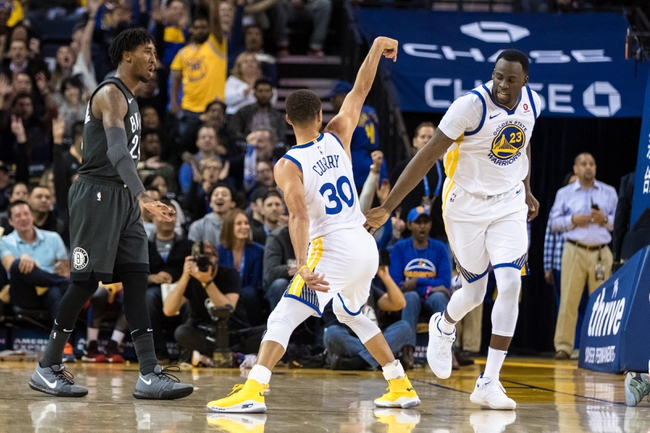 The Golden State Warriors travel to the Barclays Center to battle the Brooklyn Nets on Sunday.

The Golden State Warriors will be gunning for a fourth straight win after blowing past the Knicks in a 128-100 road win on Friday. Stephen Curry drained six three-pointers on his way to 29 points while Draymond Green racked up 18 points with six assists and three steals, but the night belonged to Kevin Durant who poured in 25 of his 41 points in the fourth quarter where the Warriors outscored the Knicks by 47-16. As a team, the Warriors shot 58 percent from the field and 16 of 33 from the three-point line but they found themselves in a battle until the fourth quarter where Durant took over.

Meanwhile, the Brooklyn Nets have won just two of their first five games and they will be looking to bounce back after falling to the Pelicans in a 117-115 road loss on Friday. De’Angelo Russell led the team with 24 points and four assists, Caris LeVert added 21 points while Shabazz Napier chipped in with 16 points in just 15 minutes off the bench. As a team, the Nets shot 43 percent from the field and 19 of 40 from the three-point line but this game went down to the wire as the Nets actually led by a point until the Pelicans’ Jrue Holiday drained the game-winner with 2 seconds left.

The Nets have been playing a little better than their record suggests and they’re coming into this game fresh off a narrow loss to the in-form Pelicans. With that being said, the Warriors haven’t been playing anywhere near their best but they’re certainly heating up as they’ve now won their last three games by at least 20 points. Always tough to lay this many points on the road but with Curry and Durant on fire, I think the Warriors make it four straight blowouts in this one.