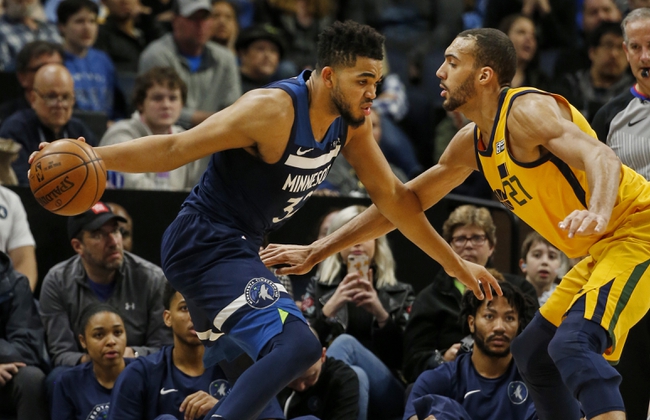 The Utah Jazz pay a visit to the Minnesota Timberwolves at the Target Center on Wednesday night.

The Utah Jazz have been heating up lately and they will be gunning for a fourth straight win after taking down the Mavericks in a 113-104 win on Sunday. Rudy Gobert was dominant in the paint as he led the team with 23 points, 16 rebounds and three blocks, Donovan Mitchell added 20 points with four assists while Joe Ingles chipped in with 12 points and five assists. As a team, the Jazz shot 52 percent from the field and 10 of 25 from the three-point line as they held on to win despite committing a total of 18 turnovers. The Jazz could’ve easily lost this game had it not been for the efforts of rookies Georges Niang and Grayson Allen who combined for a crucial 24 points off the bench.

Meanwhile, the Minnesota Timberwolves must have felt uncomfortable facing a possible third straight loss, but they were able to stop the skid with a hard-fought 124-120 home win over the Lakers on Monday. Jimmy Butler drained six three-pointers en route to a game-high 32 points, Karl-Anthony Towns added 25 points with 16 rebounds and six assists while Derrick Rose chipped in with 11 points and seven assists off the bench. As a team, the Timberwolves shot just 42 percent from the field and 14 of 29 from the three-point line but they were able to keep it close with the Lakers until they went on a decisive 14-2 run midway through the fourth quarter to escape with the much-needed win.

The Timberwolves will be breathing a little sigh of relief after their narrow win over the revamped Lakers, but they’ve been anything but consistent

The Timberwolves will be feeling much better after stopping the rot with a hard-fought win over the new-look Lakers, but they’ve been anything but consistent as they had lost three of four before Monday’s win. Meanwhile, the Jazz are really starting to look good with Gobert coming off his best game of the season and the bonus is that they received game-winning efforts from their rookies. I still don’t trust the Timberwolves so I’m leaning towards the Jazz who have covered in four of the last five meetings in Minnesota.