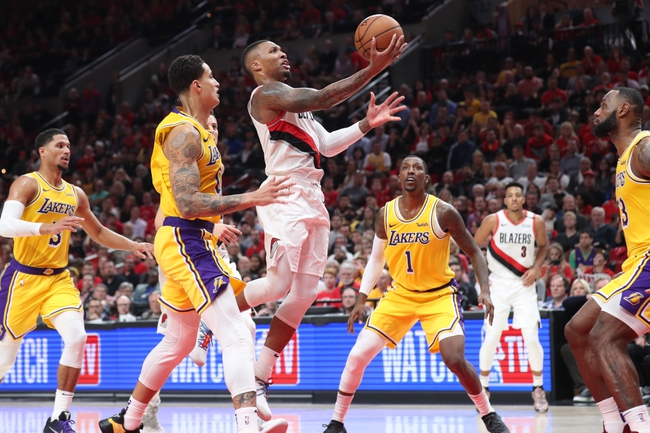 The Los Angeles Lakers pay a visit to the Moda Center to battle the Portland Trailblazers on Saturday night.

The Los Angeles Lakers have won three of their last five games and they will be aiming to build on Wednesday’s 114-113 home win over the Mavericks. LeBron James led the team with 29 points, five rebounds and six assists, Kyle Kuzma added 18 points, Brandon Ingram scored 17 points while JaVale McGee chipped in with 16 points, 15 rebounds and five blocks. As a team, the Lakers shot 51 percent from the field and 10 of 17 from the three-point line as they dominated the Mavericks for most of the game, but the win was anything but convincing as they escaped on a free-throw from James after squandering a 14-point lead in the final four minutes of the game.

Meanwhile, the Portland Trailblazers have been in great form as they’ve won six of their first eight games and they will be gunning for a fourth straight win after taking down the Pelicans in a 132-119 home win on Thursday. Damian Lillard led the team with 26 points and six assists, Jusuf Nurkic added 20 points while Al-Farouq Aminu chipped in with 17 points and 10 rebounds. As a team, the Trailblazers shot 50 percent from the field and 18 of 35 from the three-point line as they poured in 102 points after three quarters, but what was key to the win was their defense in the fourth quarter where they held the shorthanded Pelicans to just 20 points.

These two teams last met in the season opener on Oct 18 and it was the Trailblazers who won by 128-119 at home. The Blazers pulled away late on the back of a combined 52 points from Damian Lillard and Nik Stauskas but it was a close contest from start to finish. The new-look Lakers were playing their first official game together and it showed as they missed their first 15 three-point attempts. The Lakers have improved since the season opener and they will be well-rested coming into this game, but with the line so low, I'm sticking with the Blazers who are always tough to beat at the Moda Center.