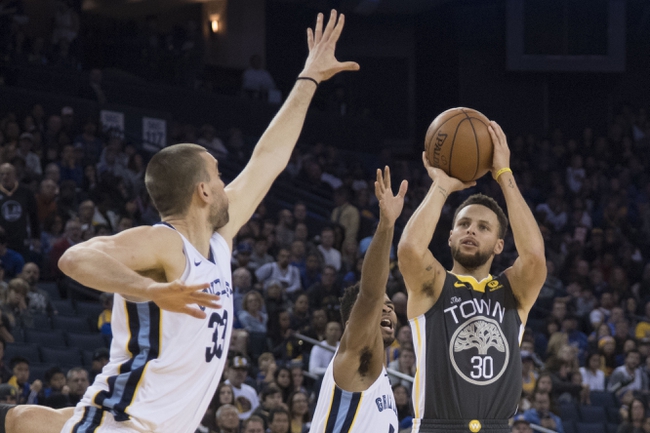 The Golden State Warriors play host to the Memphis Grizzlies at the Oracle Arena on Monday night.

The Memphis Grizzlies have won five of their first eight games of the season but they will be hoping to bounce back after falling to the Suns in a 102-100 road loss last night. Shelvin Mack led the team in scoring with 21 points off the bench, Dillon Brooks added 17 points while MarShon Brooks chipped in with 11 points. As a team, the Grizzlies shot 47 percent from the field and seven of 23 from the three-point line so they could’ve done with more production from their starters, especially Mike Conley who just three of 16 for his 12 points and Marc Gasol who shot just two of 13 for his seven points. Even with those shooting struggles, the Grizzlies had a chance to escape with the win as they led by 12 points but they just couldn’t stop Devin Booker who scored 14 of his 25 points in the fourth quarter including the game-winner.

Meanwhile, the Golden State Warriors have won nine of their first 10 games of the season and they will be looking for an eighth straight win after blowing past the Timberwolves in a 116-99 win on Friday. Kevin Durant led the team with 33 points, 13 rebounds and three assists, Stephen Curry added 28 points with nine rebounds and seven assists while Klay Thompson chipped in with 22 points. As a team, the Warriors shot 49 percent from the field and 13 of 34 from the three-point line as they looked to be in a bit of trouble against the Timberwolves before running away late with a 33-12 fourth quarter explosion.

Head to head, the under is 12-5 in the last 17 meetings and the Grizzlies are 2-5 ATS in the last seven meetings in Golden State.

The Grizzlies have been in solid form to start the season, but they will be kicking themselves after blowing a late 12-point lead against the Suns last night. The Warriors have been the hottest team in the league as they’ve won seven straight and it hasn’t even been competitive as six of their seven wins were by double-digits. The bookies are giving plenty of free points to the Grizzlies which seems tempting, but playing on the road against the Warriors on a second night of a back to back set smells like trouble. The Warriors have covered in each of their last four home games and I think that trend continues in this one.