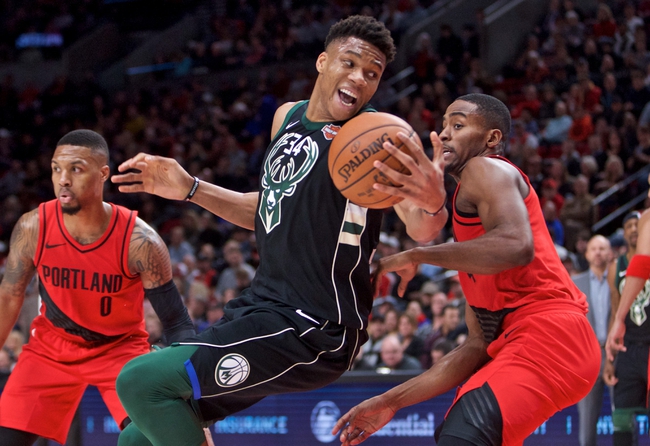 The Portland Trailblazers play host to the Milwaukee Bucks at the Moda Center on Tuesday night.

The Milwaukee Bucks have hit the ground running this season with eight wins in their first nine games and they will be looking to stay hot after blowing past the Kings in a 144-109 home win on Sunday. Giannis Antetokounmpo led the team with 26 points, 15 rebounds and 11 assists, Eric Bledsoe added 17 points, Ersan Ilyasova scored 15 points while Khris Middleton had a quiet night of just 12 points. As a team, the Bucks shot 48 percent from the field and they set a franchise high with 56 three-point attempts of which they made 22.

Meanwhile, the Portland Trailblazers have been in solid form themselves as they’ve won four of their last five games and they will be looking to stay hot after blowing past the Timberwolves in a 111-81 home win on Sunday. Jusuf Nurkic led the team in scoring with 19 points on eight of 11 shooting, Damian Lillard added 18 points with five assists while CJ McCollum chipped in with 16 points. As a team, the Trailblazers shot 44 percent from the field and seven of 28 from the three-point line but they won this game on the back of their reserves, particularly Meyers Leonard and Zach Collins who scored 15 and 11 points respectively.

The Bucks have lost just one game so far this season and they’ve already claimed big wins over the 76ers and the Raptors, but their lone loss came against the Celtics on the road and this Trailblazers are providing a similar challenge. The Bucks are clearly the team in better form but the Trailblazers are always tough to beat at home because the role players usually stand up like they did on Sunday against the Timberwolves. This could go either way, but I’m leaning towards Lillard and the Blazers to get the win in this one.