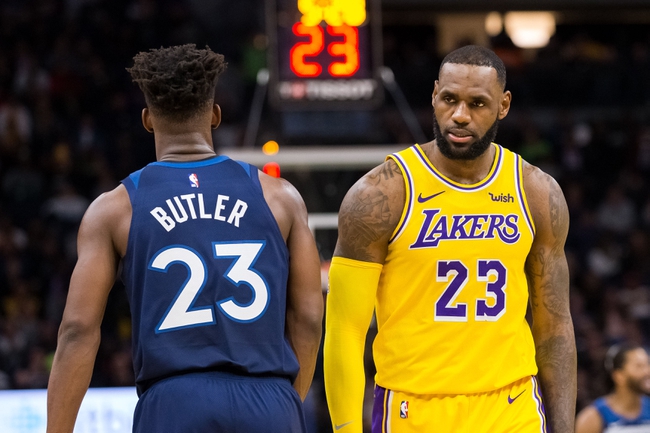 The Minnesota Timberwolves pay a visit to the Los Angeles Lakers at the STAPLES Center on Wednesday.

The Minnesota Timberwolves could really do with a win as they’ve lost five of their last seven games and they will be hoping to avoid a fourth straight loss after falling to the Clippers in a 120-109 road loss on Monday. Karl-Anthony Towns and Jimmy Butler each scored 2 points while Derrick Rose led the team in scoring with 21 points and four assists. As a team, the Timberwolves shot 47 percent from the field but just five of 21 from the three-point line and they could’ve done with better production from Andrew Wiggins who struggled, shooting just four of 16 from the field to finish with 13 points.

Meanwhile, the Los Angeles Lakers have won just four of their first 10 games of the season and they will be hoping to bounce back after getting blown out by the shorthanded Raptors in a 121-107 home loss on Sunday. Kyle Kuzma led the team in scoring with 24 points on 10 of 16 shooting, LeBron James added 18 points with six assists while Brandon Ingram chipped in with 16 points. As a team, the Lakers shot 45 percent from the field and a miserable six of 24 from the three-point line but this game was over before it really began as the Raptors stormed out of the gates to lead by 42-17 after the first quarter. To make matters worse, the Raptors didn’t even have their best player in Kawhi Leonard who was rested for the game.

The Timberwolves are still trying to work their way through the season despite all the Butler drama that is surely affecting team morale, but they’re capable of pulling off the upset against this new-look Lakers team coming off their worst loss of the season. The Timberwolves have covered in four of the last five meetings against the Lakers and they escaped with a 124-120 win back on Oct 29 but after embarrassing themselves at home against the Raptors on Sunday, no one needs a win more than the Lakers.