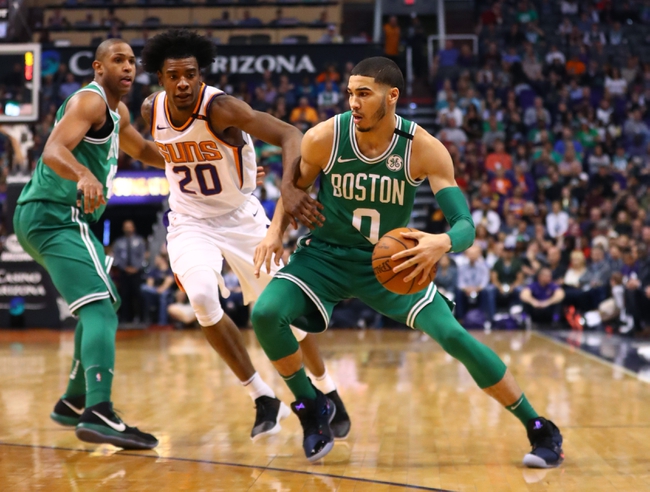 The Boston Celtics pay a visit to the Phoenix Suns at the Talking Stick Resort Arena on Thursday night.

The Boston Celtics will be hoping to avoid a third straight defeat after falling to the Nuggets in a 115-107 road loss on Monday. Kyrie Irving led the team with 31 points and five assists on 13 of 17 shooting, Jayson Tatum and Jaylen Brown each scored 15 points while Al Horford chipped in with 12 points. As a team, the Celtics shot 50 percent from the field as they stormed out of the gates to lead by as many as 18 points in the first quarter, but the Nuggets dominated the rest of the way behind a career-high 48 points from Jamal Murray. The Celtics shot just nine of 31 from the three-point line, they were outrebounded by 59-43 and shot just 10 of 12 from the free-throw line compared to the Nuggets who made 20 of 28.

Meanwhile, the Phoenix Suns have lost eight of their first 10 games of the season and they will be looking to bounce back after getting blown out by the Nets in a 104-82 home loss on Tuesday. Devin Booker led the team in scoring with 20 points but shot just six of 21 from the field, DeAndre Ayton added 15 points with 13 rebounds while Isaiah Canaan and Richaun Holmes each scored 13 points. As a team, the Suns shot just 34 percent from the field and nine of 25 from the three-point line as they finished with a season low in total points and field goal percentage.

The Celtics still look like a work in progress and and they could really do with a win to steady the ship after losing two on the trot, so a matchup with the lowly Suns could be just what the doctor ordered. The Suns are surprisingly 5-0 ATS in the last five meetings overall, but seven of their eight losses this season have come by double-digits and I think the Celtics take advantage with a comfortable bounce back performance in this one.