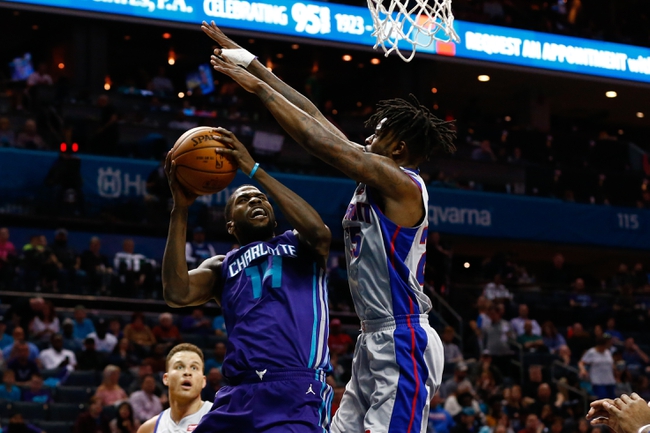 The Detroit Pistons play host to the Charlotte Hornets at Little Caesars Arena on Sunday afternoon.

The Charlotte Hornets have been in decent form as they’ve won four of their last seven games but they will be aiming to bounce back after falling just short in a 133-132 overtime loss at Philadelphia on Friday. Kemba Walker led the team with 30 points, seven rebounds and nine assists, Jeremy Lamb added 17 points while Dwayne Bacon chipped in with a season-high 15 points off the bench. As a team, the Hornets shot 39 percent from the field and 16 of 40 from the three-point line as they had seven players finished in double figures, but despite rallying back from a 21-point deficit, the Hornets just couldn’t get the stops when they really needed it as the 76ers’ Joel Embiid torched them for 42 points.

Meanwhile, the Detroit Pistons have had a really up and down start to the season as they’ve won six of their first 11 games but they will be gunning for a third straight win after blowing past the Hawks in a 124-109 road win on Friday. Andre Drummond led the team with 23 points on 10 of 15 shooting, Stanley Johnson added a season-high 22 points off the bench while Langston Galloway chipped in with 16 points. As a team, the Pistons shot 47 percent from the field and an impressive 20 of 47 from the three-point line. Blake Griffin finished with just six points on two of 10 shooting but he was hardly needed as the Pistons never looked like they were in danger after outscoring the Hawks by 40-20 in the first quarter.

The Hornets will be eager to get back on the court after fighting all the way back from a 21-point deficit on Friday, only to lose by one point in overtime, but they’re up against a Pistons team who look to be regaining their form with two straight wins following their five-game skid. The Hornets have covered in six of their last eight road games but the home team is 9-3 ATS in the last 12 meetings, so with the line being so low, I’m sticking with the Pistons to win in a close one.