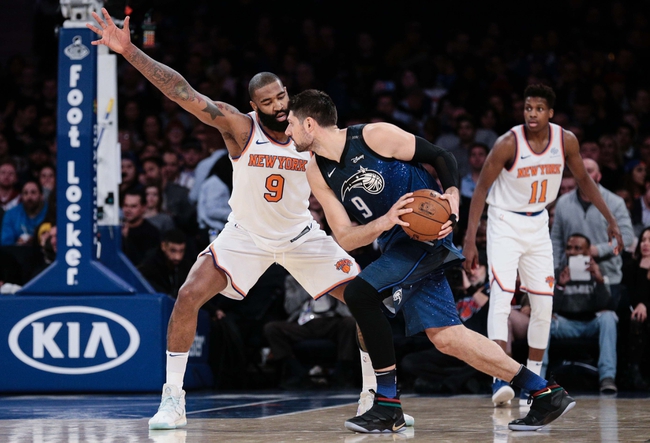 The Orlando Magic have won three of four games since their four-game skid and they will be looking to keep things rolling after taking down the Wizards in a 117-108 home win on Friday. Nikola Vucevic led the team with 21 points, 14 rebounds and three assists, Aaron Gordon added 20 points with four assists while Evan Fournier chipped in with 15 points and six assists. As a team, the Magic shot 51 percent from the field and 13 of 31 from the three-point line but the real positive was that it was a complete team effort as they had seven players finish in double figures in scoring. It wasn’t all smooth sailing as the Wizards cut a 25-point deficit to just one point with 2:30 left on the clock, but the Magic still came away with the win behind clutch plays from Augustin and Fournier.

Meanwhile, the New York Knicks have been in rough shape as they’ve lost four of their last six games and they will be looking to bounce back after last night’s 128-112 loss at Toronto. Tim Hardaway Jr. led the team with 27 points, Enes Kanter added 15 points with 15 rebounds while Mario Hezonja chipped in with 13 points. As a team, the Knicks shot 45 percent from the field and just six of 22 from the three-point line but there was no catching the Raptors in the second and third quarters where they allowed 75 points. Frank Ntilikina finished the game with just five points on two of eight shooting while Noah Vonleh had just six points which just left the second unit with too much to handle against the league-leading Raptors.

The Knicks have really been struggling lately as they just rely too heavily on Hardaway Jr. and they could easily be sitting on just two wins on the season if not for their two wins over the lowly Hawks. The Magic look to have recovered from their four-game losing streak as they’re now aiming for a third straight win. The Magic are also 15-7-1 ATS in their last 23 road games and the road team is 6-1 ATS in the last seven meetings so I think there’s some nice value with the Magic as slight underdogs in this one.