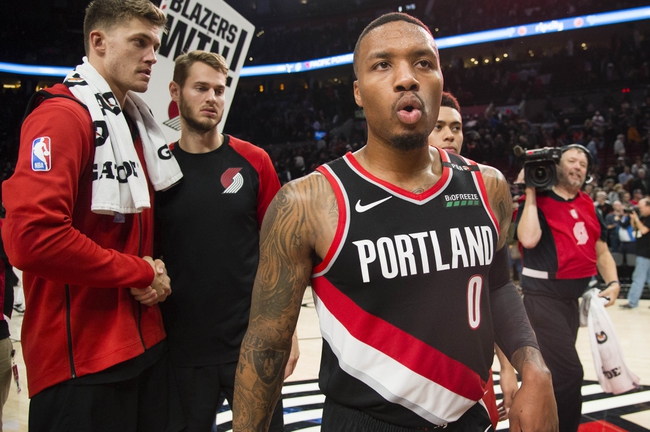 The Boston Celtics and the Portland Trailblazers duke it out at the Moda Center on Sunday night.

The Boston Celtics look to have cooled off from their four-game win streak as they’ve now lost three of their last four games after falling to the Jazz in a 123-115 road loss on Friday. Terry Rozier was inserted into the starting lineup and led the team with 22 points, Jayson Tatum added 21 points with four assists and five steals while Marcus Morris chipped in with 16 points off the bench. As a team, the Celtics shot 44 percent from the field and 17 of 43 from the three-point line, but once again it was their defense that was the problem as they allowed the Jazz to shoot a healthy 55 percent from the field. Gordon Hayward scored just 13 points with seven assists in his return to Utah but it has to be noted that the Celtics were without Kyrie Irving who was absent from the game to attend his grandfather’s funeral.

Meanwhile, the Portland Trailblazers have been on a tear lately as they’ve won six of their last seven games and they will be gunning for a fourth straight win after taking down the Clippers in a 116-105 home win on Thursday. Damian Lillard led the team with 25 points and four assists, CJ McCollum added 23 points while Jusuf Nurkic chipped in with 16 points. As a team, the Trailblazers shot just 41 percent from the field and 10 of 26 from the three-point line but in a game that was closely contested throughout, it was actually the bench who combined for 41 points which was the difference in the end. With the win, Portland improved to 9-3 overall and 6-2 at home.

The Celtics were without Irving in their loss to the Jazz, but he is expected to be available on Sunday which is obviously a major boost to their offense. However, the Celtics’ problems, at least on this road trip has been their defense which has allowed 112.2 points in the last four games, so it’s going to be tough to contain the red-hot Trailblazers who have covered in 23 of their last 30 home games. I’d go with the Celtics if I were getting more points from the bookmakers but with the line so low, I think the value is with the Trailblazers to stay hot with another win and cover at home where they’re always tough to beat.