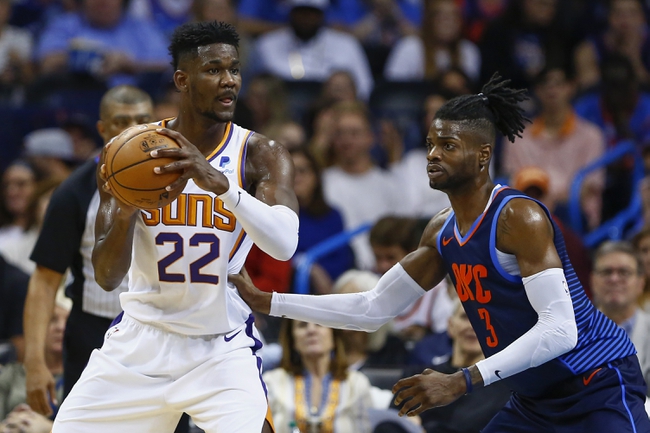 The Phoenix Suns and the Oklahoma City Thunder duke it out at the Chesapeake Energy Arena on Monday night.

The Phoenix Suns have won just two of their first 12 games of the season and they will be hoping to avoid a fourth straight loss after falling to the Pelicans in a 119-99 road loss on Saturday. TJ Warren led the team with 25 points, DeAndre Ayton added 20 points with 12 rebounds while Devin Booker chipped in with 12 points and seven assists, but no other player finished in double figures as the Suns shot just 40 percent from the field and 10 of 36 from the three-point line. Defensively, the Suns had no answer for Anthony Davis who finished with 26 points but what really killed them was their effort on the boards as they were outrebounded by 53-37.

Meanwhile, the Oklahoma City Thunder have been in fine form lately but they will be looking to bounce back after having their seven-game win streak snapped by the Mavericks in a 111-96 road loss on Saturday. Paul George led the team with 20 points, 13 rebounds and six assists but shot just eight of 21 from the field, Steven Adams added 20 points while Dennis Schroder chipped in with 19 points on eight of 21 shooting. As a team, the Thunder shot 39 percent from the field and nine of 34 from the three-point line, but they made up for it by grabbing an impressive 26 offensive rebounds. Unfortunately, the Thunder were poor on the defensive end as they allowed the Mavericks to shoot 55 percent from the field and 14 of 29 from the three-point line. Russell Westbrook sat out his third straight game with an ankle sprain and is currently listed as out for Monday.

The Thunder were impressive during their seven-game win streak but they fell back to Earth against the Mavericks in their last outing so they’ll be looking to bounce back here. The Suns continue to be one of the worst teams in the league, especially on the road where they are currently 0-5, so I’m not expecting an upset in this one. The home team is 5-2 ATS in the last seven meetings so  I’m sticking with the Thunder to get back on track with a comfortable win at home where they’ve won four straight.