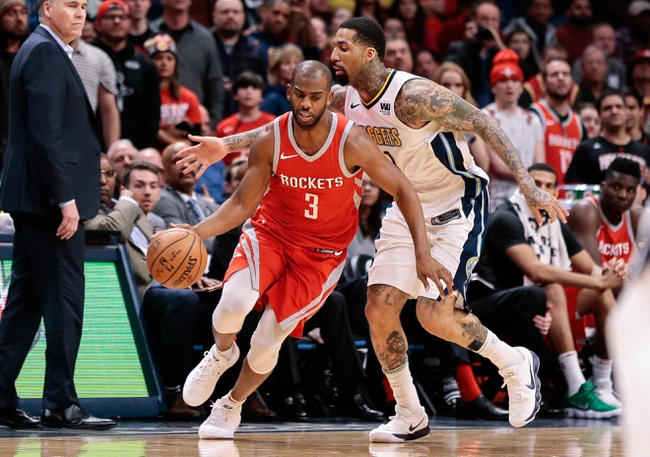 The Denver Nuggets play host to the Houston Rockets at the Pepsi Center on Tuesday night.

The Houston Rockets have found a bit of form with four wins in their last six games and they will be feeling pretty good after snapping a two-game skid with a 115-103 win over the Pacers on Sunday. James Harden has been below his best so far this season but he led the way with eight three-pointers on his way to 40 points with nine assists, Chris Paul added 26 points while Clint Capela finished with 18 points. As a team, the Rockets shot 48 percent from the field and 20 of 47 from the three-point line as they cruised to victory after exploding in the second quarter where they outscored the Pacers by 44-23.

Meanwhile, the Denver Nuggets have cooled off with three straight losses since winning nine of their first 10 games and they will be looking to bounce back after falling to the Bucks in a 121-114 home loss on Sunday. Paul Millsap drained five three-pointers on his way to 25 points, eight rebounds and six assists, Nikola Jokic added 20 points with six assists while Trey Lyles and Gary Harris chipped in with 16 and 15 points respectively. As a team, the Nuggets shot 46 percent from the field and 18 of 38 from the three-point line but they couldn’t keep a lid on the Bucks’ trio of Giannis Antetokounmpo, Khris Middleton and Brook Lopez who finished with a record-tying eight three-pointers.

Clint Capela was a chance to miss this game after getting injured on Sunday, but he is expected to play which is obviously a big positive for the Rockets who rely on his so much on both ends of the floor. With that being said, the Nuggets are clearly the team in better form at this stage of the season but they could really do with a win after three losses on the trot. I'm tempted to go with the Rockets as slight underdogs here but I like the Nuggets to bounce back after a tough narrow loss to the red-hot Bucks in their last outing. The Nuggets have lost two straight at home and I think they're good enough to take advantage of the Rockets' poor defense and come out with a win.