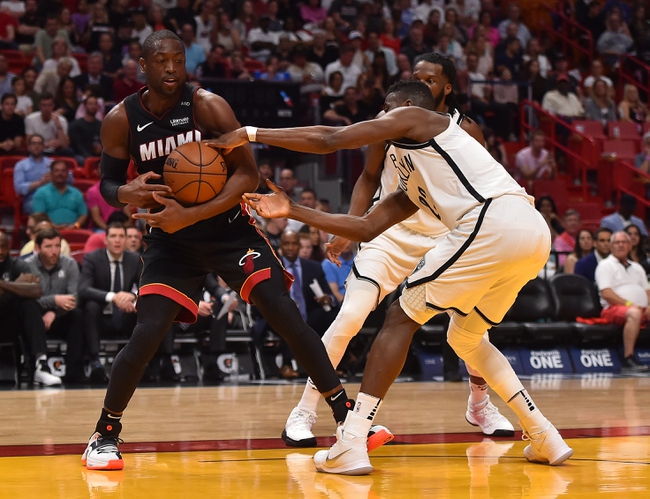 The Miami Heat pay a visit to the Brooklyn Nets at the Barclays Center on Wednesday night.

The Miami Heat have lost six of their last eight games and they will be hoping to avoid a fourth straight loss after falling to the 76ers in a 124-114 defeat on Monday. Goran Dragic led the team with 22 points and five assists, Josh Richardson added 17 points while Wayne Ellington chipped in with 14 points off the bench. As a team, the Heat shot 48 percent from the field and 13 of 31 from the three-point line but they were always plagued with foul trouble as Hassan Whiteside and Kelly Olynyk finished with five fouls each. Even still, it was a close game for three quarters until the Heat pulled away in the final minutes.

Meanwhile, the Brooklyn Nets have won four of their last seven games but they will be aiming to avoid a third straight loss after falling to the Timberwolves in a 120-113 road defeat on Monday. D’Angelo Russell led the team with 31 points and six assists, Rondae Hollis-Jefferson and Spencer Dinwiddie each scored 14 points while Caris LeVert chipped in with just 10 points before leaving the game with a dislocated right foot which will see him miss extended time. As a team, the Nets shot 39 percent from the field and 18 of 50 from the three-point line but they just couldn’t keep pace with the Timberwolves after losing their second leading scorer leave the court.

The Nets have been playing some decent basketball lately with four wins in their last seven outings, but they’re going to struggle to win with LeVert sitting on the sidelines. With that being said, the Heat have been in poor form so they’re not a sure bet, but this is a situation they really should take advantage of as LeVert is such a big part of the Nets’ offense. Give me the Heat to get the much-needed win and cover on the road.