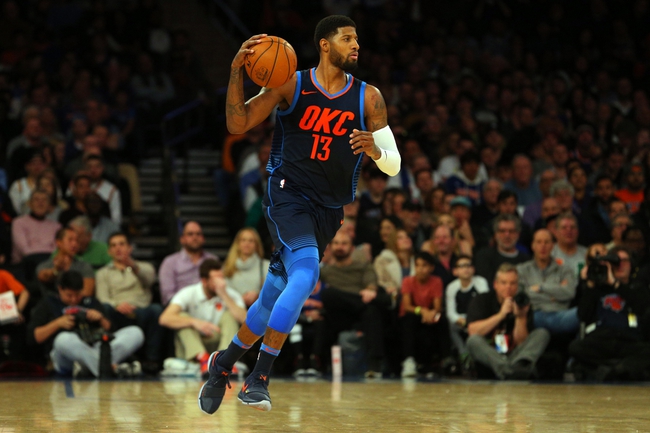 The New York Knicks and the Oklahoma City Thunder collide at the Chesapeake Energy Arena on Wednesday night.

The New York Knicks could really do with a win after losing four of their last five games and they will be looking to avoid a third straight defeat after falling to the Magic in a 115-89 loss on Sunday. Kevin Knox led the team with 17 points off the bench while Enes Kanter finished with a double-double of 16 points with 15 rebounds but no starter scored in double figures as the Knicks shot just 35 percent from the field and five of 28 from the three-point line. Tim Hardaway Jr. scored just seven points on two of 12 shooting in 26 minutes of action but this game was over in a hurry as the Knicks were already down by 20 points after the first quarter.

Meanwhile, the Oklahoma City Thunder have been on fire as they’ve won eight of their last nine games and they will be looking to stay hot after cruising past the Suns in a 118-101 home win on Monday. Paul George drained six three-pointers on his way to a game-high 32 points with six assists, Dennis Schroder added 20 points with nine asissts while Steven Adams chipped in with 18 points. As a team, the Thunder shot 46 percent from the field and 13 of 27 from the three-point line as they made light work of the lowly Suns after taking a 32-13 going into the second quarter. Russell Westbrook sat out his fourth straight game with an ankle injury and won’t be available on Wednesday.

The Thunder will once again be without their leader in Westbrook but they’re getting plenty of production from George, Schroder and Adams to keep the wins coming. The Knicks have really struggled to win lately and they were blown off the court against the Magic on Sunday, so they’ll want to bounce back but they’re only 1-4 ATS in the last five meetings in Oklahoma City. With that being said, I’m sticking with the Thunder to stay hot with another easy win and cover at home against the struggling Knicks.