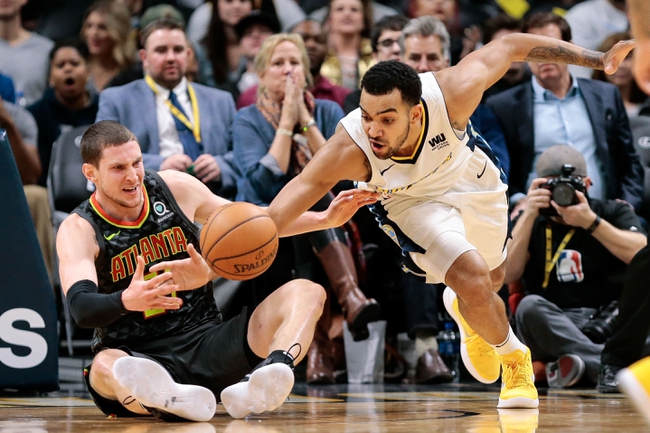 The Denver Nuggets play host to the Atlanta Hawks at the Pepsi Center on Thursday night.

The Atlanta Hawks have lost nine of their last 10 games and they will be hoping to avoid a sixth straight loss after falling to the Warriors in a 110-103 road defeat on Tuesday. Taurean Prince led the team in scoring with 22 points and four assists, Kent Bazemore added 18 points while Alex Len chipped in with 14 points. As a team, the Hawks shot 44 percent from the field and 12 of 32 from the three-point line but they needed much more from their rookie Trae Young who finished with just four points and nine assists on two of 12 shooting. With the loss, Atlanta dropped to 3-11 overall and 1-7 on the road.

Meanwhile, the Denver Nuggets were red-hot to start the season as they won nine of their first 10 games but they’ve since cooled off and are now hoping to snap a four-game skid after falling to the Rockets in a 109-99 home loss on Tuesday. Monte Morris led the team with 19 points off the bench, Jamal Murray and Gary Harris each scored 15 points while Nikola Jokic chipped in with 14 points, 12 rebounds and seven assists. As a team, the Nuggets shot 50 percent from the field and 11 of 25 from the three-point line but they couldn’t recover after falling behind by double digits in the third quarter where they were outscored by 32-21.

The Hawks haven’t been able to buy a win lately but they were surprisingly competitive against the Warriors in their last outing despite a quiet game from Young. The Nuggets won their first six home games of the season but have since lost three in a row so a win here would do a lot to steady the ship. The Hawks should hang around for half the game, but the Nuggets really need a win to snap out of their funk and I think they get that tonight in a blowout at home.