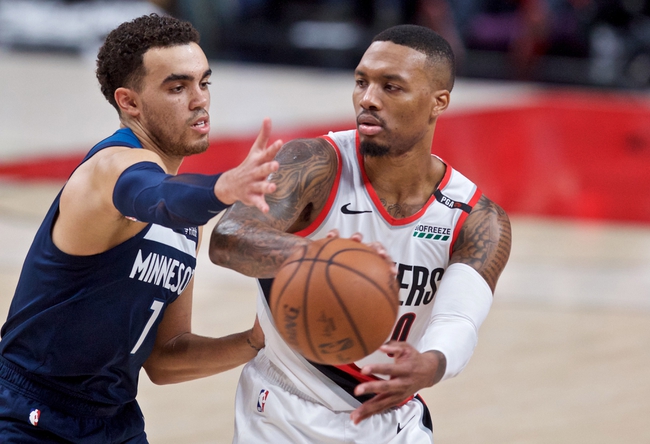 The Portland Trailblazers and the Minnesota Timberwolves collide at the Target Center on Friday night.

The Portland Trailblazers have been in fine form as they’ve won 10 of their first 14 games of the season but they will be looking to bounce back after having their four-game win streak snapped by the Lakers in a 126-117 road loss on Wednesday. Damian Lillard led the team with 31 points, eight rebounds and 11 assists, CJ McCollum added 23 points with four assists, Jusuf Nurkic scored 21 points with 14 rebounds while Al-Farouq Aminu chipped in with 18 points. As a team, the Trailblazers shot 44 percent from the field and 14 of 33 from the three-point line as they earned an early 13-point lead before the Lakers flipped the script with a game-changing 27-10 run in the final 6:05 of the second quarter. With no bench player scoring more than seven points, the Trailblazers failed to keep up with the Lakers with Lillard finishing with eight of 23 shooting from the field.

Meanwhile, the Minnesota Timberwolves have lost seven of their past 11 games but they will be aiming for a third straight win after taking down the Pelicans in a 107-100 home win on Wednesday. Karl-Anthony Towns led the team with 25 points, 16 rebounds and three assists, Andrew Wiggins added 23 points with four assists while Jeff Teague finished with a double-double of 14 points with 14 assists. As a team, the Timberwolves shot 41 percent from the field and 14 of 32 from the three-point line as they dominated the first half by 67-54 to set up the win in the team’s first game since trading away Jimmy Butler to the 76ers. Dario Saric finished with nine points in 20 minutes off the bench for his new team while Robert Covington finished with 13 points in 41 minutes as a starter.

The Timberwolves have had to play with the Jimmy Butler distraction for the first few weeks of the season but it looks as though they were able to start a new chapter with an impressive home win over the Pelicans on Wednesday with Towns and Wiggins leading the team in scoring. The new-look Timberwolves have won six of their seven home games this season, but the last time they met the Trailblazers, they lost by 111-81 back on Nov 5. This could go either way, but I like Lillard and the Trailblazers to bounce back with another win over the Timberwolves in this one.