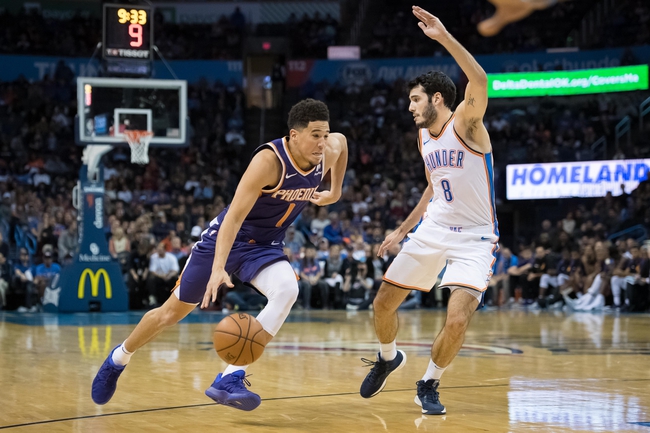 The Phoenix Suns play host to the Oklahoma City Thunder at the Talking Stick Resort Arena on Saturday night.

The Oklahoma City Thunder have been in great form as they’ve won nine of their last 10 games and they will be aiming for a third straight win after blowing past the Knicks in a 128-103 home win on Wednesday. Paul George led the team with 35 points, seven rebounds and five assists, Steven Adams added 19 points with five assists while Dennis Schroder finished with a double-double of 15 points with a season-high 12 assists. As a team, the Thunder shot 53 percent from the field and 16 of 33 from the three-point line but this game was over early as the Thunder never looked in danger after taking a 22-point late in the second quarter.

Meanwhile, the Phoenix Suns have lost 11 of their first 14 games of the season but they will be feeling pretty good after snapping a four-game skid with a 116-96 home win over the Spurs on Wednesday. TJ Warren has been in great form all season and led the team with 27 points on 10 of 17 shooting, Isiah Canaan added 19 points, DeAndre Ayton finished with 17 points while Devin Booker chipped in with 13 points and 12 assists. As a team, the Suns shot a sizzling 56 percent from the field and 15 of 31 from the three-point line as they outscored the Spurs by 64-46 in the second half to run away with it after almost blowing an early 19-point lead.

These teams last met back on Tuesday with the Thunder winning by 118-101 at home but the Suns bounce back with an impressive upset win over the Spurs so they might have revenge on their minds in this one. With that being said, the Thunder have been one of the hottest teams in the league lately and they’re really starting to thrive with George as the primary scoring option, so I’m expecting a similar result to what we saw on Tuesday. Give me the Thunder to stay hot with another win and cover in this one.