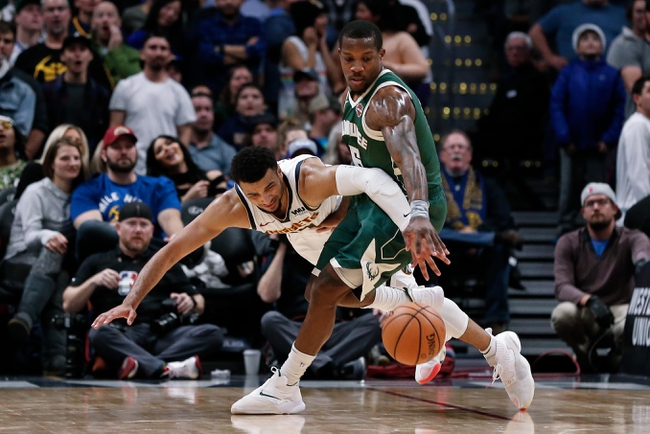 The Milwaukee Bucks play host to the Denver Nuggets at the Fiserv Forum on Monday night.

The Denver Nuggets were one of the hottest teams in the early going but they’ve lost five of their last six games and will be looking to bounce back after falling to the Pelicans in a 125-115 road win on Saturday. Nikola Jokic led the team with 25 points, 10 rebounds and eight assists, Gary Harris added 24 points with four assists, Juan Hernangomez scored 20 points while Jamal Murray chipped in with 11 points. As a team, the Nuggets shot 48 percent from the field and 15 of 39 from the three-point line but they managed just 48 points in the second half as they just had no answer for the Pelicans’ Anthony Davis who scorched them for 40 points on 20 of 21 shooting from the free-throw line.

Meanwhile, the Milwaukee Bucks have been alternating wins and losses all month but they will be looking to build on Friday’s 123-104 home win over the Bulls. Eric Bledsoe sparked the offense with 25 points and six assists on 10 of 13 shooting, Khris Middleton added 23 points with 10 rebounds and eight assists while Giannis Antetokounmpo racked up 23 points with 13 rebounds and four assists. As a team, the Bucks shot 50 percent from the field and 18 of 43 from the three-point line as they struggled with the Bulls in the first half, falling behind by as many as 22 points before exploding for 46 points in the third quarter to win comfortably in the end. It was like the Bucks flipped a switch defensively because they held the Bulls to just 41 points in the second half after allowing them 40 points in the first quarter alone.

The Nuggets have fallen off the pace lately and the same can be said for the Bucks who haven’t won consecutive games since Oct 29. The Nuggets have the edge in the betting trends as they’ve covered in four of the last five meetings in Milwaukee, but they’ve been struggling while the Bucks have only gotten better with Bledsoe heating up. With the line at a manageable five, this looks like a good spot for the Bucks who are 7-1-1 ATS in their last nine home games.