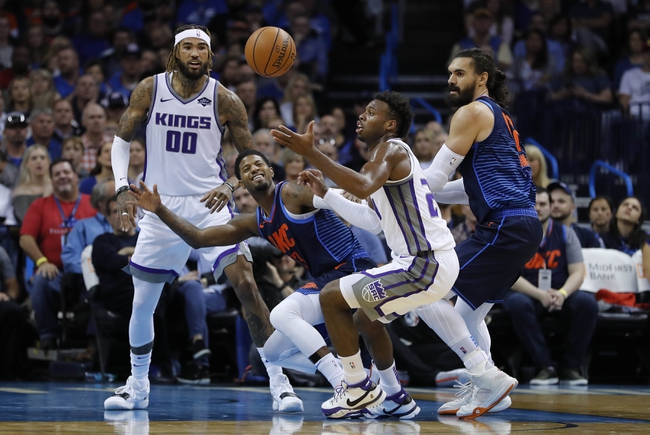 The Sacramento Kings play host to the Oklahoma City Thunder at the Golden 1 Center on Monday night.

The Oklahoma City Thunder have been one of the hottest teams in the league lately and they will be gunning for a fourth straight victory after taking down the Suns in a 110-100 road win on Saturday. Paul George continued his hot form with 32 points and 11 rebounds, Steven Adams added 26 points on 11 of 15 shooting while Dennis Schroder chipped in with 15 points, seven assists and four steals. As a team, the Thunder shot 44 percent from the field and seven of 24 from the three-point line as they never looked in doubt after leading by as many as 18 points midway through the third quarter. Oklahoma City have now won 10 of their last 11 games to improve to 10-5 overall and 4-3 on the road.

Meanwhile, the Sacramento Kings have been in a bit of a slump as they’ve lost five of their last seven games and they will be hoping to avoid a third straight defeat after getting blown out by the Rockets in a 132-112 road loss on Saturday. Buddy Hield led the team with 23 points on 10 of 17 shooting, De’Aaron Fox added 19 points with three assists while Marvin Bagley III chipped in with 16 points off the bench. As a team, the Kings shot 45 percent from the field and 11 of 35 from the three-point line but they were poor defensively as the Rockets finished with a season-high 132 points on 56 percent shooting from the field. With the loss, Sacramento fell to 8-8 overall and 4-5 on the road.

Westbrook has been ruled out for Monday due to personal reasons but the Thunder have been playing great basketball in his absence as both George and Schroder have picked up the slack on offense. The Kings have really cooled off lately and they looked like last year’s Kings in their 20-point loss to the Rockets on Saturday. The betting trends don’t support me, but I think the Thunder stay hot with another solid road win and cover against the slumping Kings in this one.