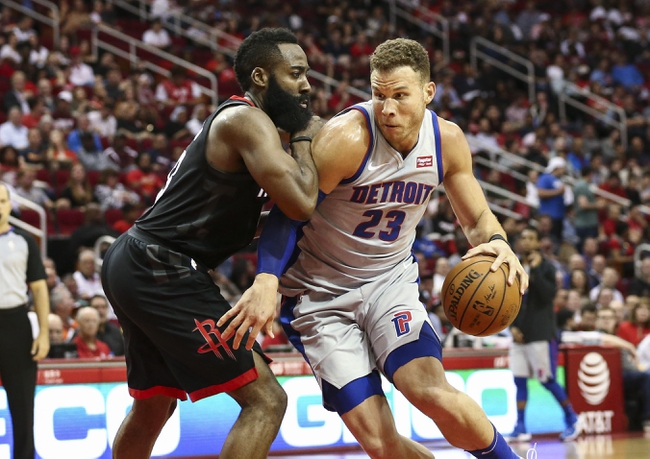 The Detroit Pistons invade the Toyota Center to do battle with the Houston Rockets on Wednesday night.

The Detroit Pistons have found a bit of form with four wins in their last five outings and they will be aiming for a third straight win after taking down the Cavaliers in a 113-102 home win on Monday. Andre Drummond led the team with 23 points, 16 rebounds and three assists while Reggie Bullock and Blake Griffin each scored 21 points. As a team, the Pistons shot 46 percent from the field and 13 of 38 from the 3-point line and were never in danger after starting hot and taking a 66-46 lead going into halftime. With the win, Detroit improved to 8-6 overall and 4-3 at home.

Meanwhile, the Houston Rockets have won seven of their last nine games and they will be looking for a fifth straight victory after blowing past the Kings in a 132-112 home win on Saturday. James Harden led the way with 34 points and eight assists, Chris Paul added 24 points with nine assists while Clint Capela chipped in with 23 points, 16 rebounds and four blocks. As a team, the Rockets shot 56 percent from the field and 20 of 47 from the 3-point line as they easily took down the Kings after leading by as many as 24 points early in the fourth quarter. With the win, Houston improved to 8-7 overall and 3-4 at home.

The Rockets have gone through their struggles this season but they look to be in a groove with four wins on the trot. The Pistons have also started to pick up their play lately and they’ve proven themselves capable of an upset after beating the Raptors on Wednesday, but I have to give the edge to the Rockets who are starting to look like the team from last season. The line seems a little hefty but the Rockets have won their last four games by double-digits and that trend continues here.