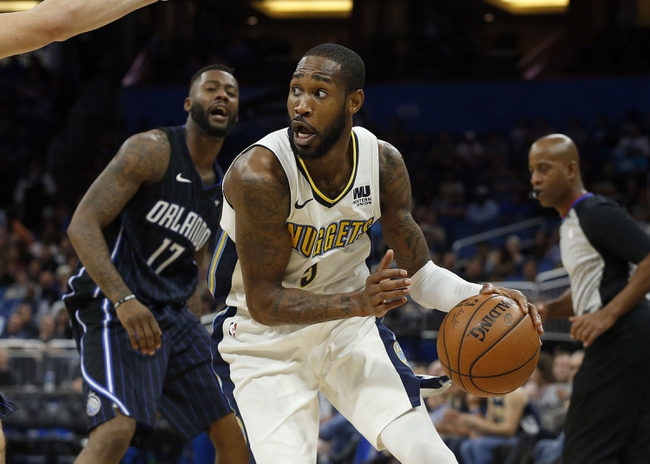 The Orlando Magic pay a visit to the Denver Nuggets at the Pepsi Center on Friday night.

The Orlando Magic have been in great form lately as they’ve won seven of their last 10 games but they will be looking to bounce back after having their three-game win streak snapped by the Raptors in a 93-91 home loss on Tuesday. Evan Fournier led the team with 27 points and four assists, Aaron Gordon added 16 points while Nikola Vucevic racked up 14 points with 18 rebounds and four assists. As a team, the Magic shot just 40 percent from the field and eight of 30 from the 3-point line as they outscored the Raptors in the third quarter by 38-26 to tie the game after falling behind by as many as 18 points only to lose on a fadeaway jumper from the Raptors’ Danny Green in the final second of the game. With the loss, Orlando fell to 9-9 overall and 6-6 at home.

Meanwhile, the Denver Nuggets have been in a real slump as they’ve lost six of their last eight games but they were able to arrest a two-game slide with a 103-101 road win at Minnesota on Wednesday. Paul Millsap led the team in scoring with 25 points on 11 of 13 shooting, Jamal Murray added 18 points, Gary Harris scored 17 points while Nikola Jokic chipped in with seven points, 12 rebounds and 10 assists. As a team, the Nuggets shot 47 percent from the field and 14 of 35 from the 3-point line but it was their defense that was key to the win, especially in the third quarter where they outscored the Timberwolves by 35-18. The fourth quarter wasn’t so friendly to the Nuggets as they saw a 13-point lead cut to just one point with 4:44 left in the game but they did enough to escape with the win.

The Magic have quietly been one of the better teams in the league lately and it’s because Vucevic is really starting to put up big numbers, so I wouldn’t be surprised if we saw an upset in this one. However, while the Nuggets are going through a rough patch as they have lost three of their last four home games, they are still 11-4 ATS in the last 15 home meetings against the Magic so I’m banking on them to snap out of their funk with a much-needed win and cover in this one.