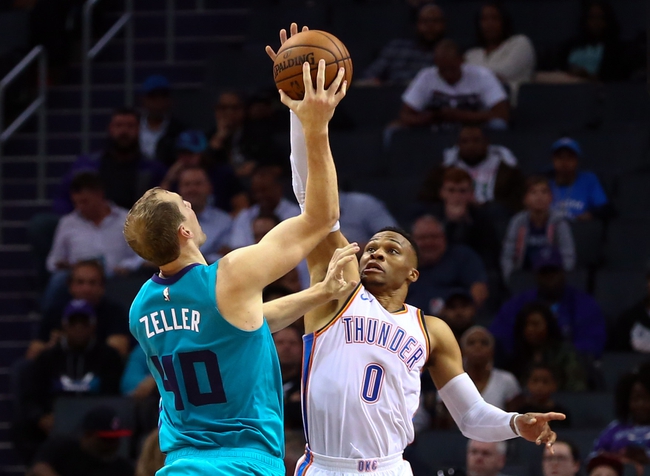 The Oklahoma City Thunder play host to the Charlotte Hornets at the Chesapeake Energy Arena on Friday night.

The Charlotte Hornets have split their last six games, but they will be aiming for a third straight win after taking down the Pacers in a 127-109 home win on Wednesday. Jeremy Lamb led the team with 21 points and four assists, Kemba Walker added 16 points with 11 assists while Dwayne Bacon chipped in with 18 points off the bench. As a team, the Hornets shot a healthy 56 percent from the field and 18 of 29 from the 3-point line as they poured in 68 points in the first half before blowing out the score in the third quarter where they outscored the shorthanded Pacers by 37-24. With the win, Charlotte improved to 9-8 overall and 6-3 at home.

Meanwhile, the Oklahoma City Thunder have been on a tear as they’ve won 11 of their last 13 games and they will be full of confidence after taking apart the shorthanded Warriors in a 123-95 road win on Wednesday. Dennis Schroder led the team with 32 points on 12 of 19 shooting off the bench, Paul George added 25 points with nine rebounds and five assists while Russell Westbrook racked up a triple-double of 11 points with 11 rebounds and 13 assists. As a team, the Thunder shot 48 percent from the field and 13 of 35 from the 3-point line as they dominated the first half by 60-46 before making it a complete blowout in the fourth quarter where they outscored the Warriors by 36-16. With the win, OKC improved to 11-6 overall and 5-4 on the road.

The Hornets have had an up and down start to the season but they’ve certainly been heating up in recent games with Walker lighting up the scoreboards. However, the Thunder have been in great form for a long time now and they will be feeling pretty good after routing the Warriors on Wednesday. These two teams last met on Nov 1 and it was the Thunder who won by 111-107 in Charlotte and I’m expecting a similar result as the Hornets are just 2-8-1 ATS in the last 11 meetings in Oklahoma City.