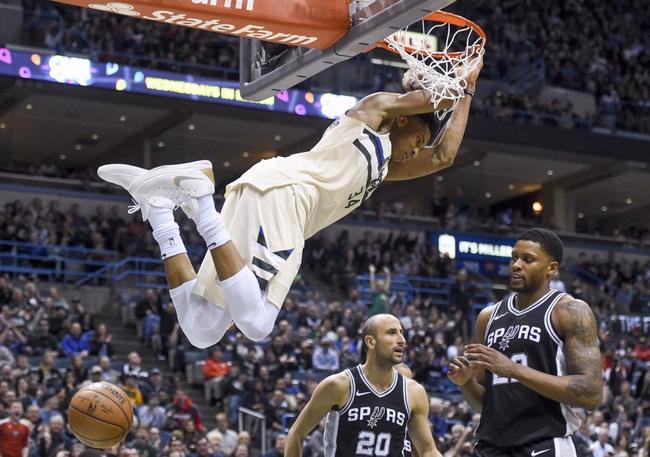 The San Antonio Spurs and the Milwaukee Bucks duke it out at the Fiserv Forum on Saturday night.

The San Antonio Spurs have been in a real rough patch with seven losses in their last 10 games but they were able to avoid a third straight defeat with last night’s 111-100 win at Indiana. LaMarcus Aldridge led the team with 33 points, 14 rebounds and three assists, DeMar DeRozan added 16 points with six assists, Patty Mills scored 15 points while Rudy Gay chipped in with 11 points, 12 rebounds and seven assists. As a team, the Spurs shot 50 percent from the field and 10 of 21 from the 3-point line but this win was about their perimeter defense as they held the Pacers to a season-worst three of 24 shooting from the 3-point line. With the much-needed win, San Antonio improved to 9-9 overall and 3-6 on the road.

Meanwhile, the Milwaukee Bucks will be looking to bounce back after having their three-game win streak snapped by the Suns in last night’s 116-114 home loss. Giannis Antetokounmpo led the team with 35 points on 14 of 16 shooting, Malcolm Brogdon added 22 points on eight of 10 shooting while Khris Middleton chipped in with 15 points and four assists. As a team, the Bucks shot 48 percent from the field but just 10 of 44 from the 3-point line thanks largely to Brook Lopez who missed all 12 of his 3-point attempts to finish with just seven points on three of 17 shooting from the field. Still, the Bucks had their chances to escape with the win as they actually led by six points with 1:27 left before the Suns closed the game on an 8-0 run.

Head to head, the over is 13-5 in the last 18 meetings in Milwaukee and the Spurs are 0-4 ATS in the last four meetings.

The Bucks will be eager to get back on the court and atone for last night’s embarrassing loss to the Suns but they’re up against a Spurs team who will be looking to build on last night’s impressive road win over the Pacers. The Spurs are certainly capable of the upset and we’re getting a lot of points from the bookies in this one, but I’m sticking with the Bucks to bounce back in fine fashion with a big win at home where they’ve 9-1-1 ATS in their last 11 games.