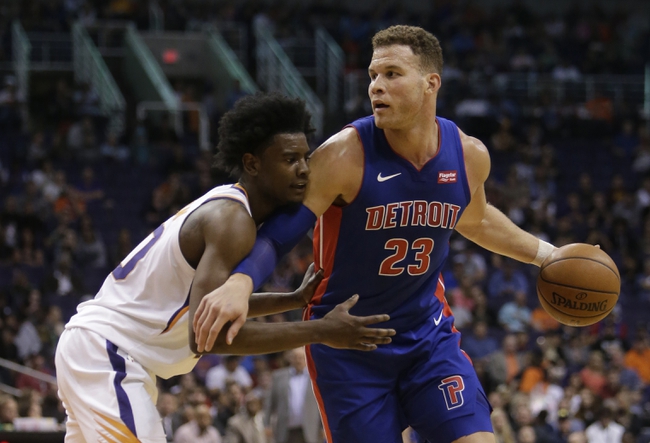 The Detroit Pistons and the Phoenix Suns duke it out at Little Caesars Arena on Sunday night.

The Phoenix Suns have lost seven of their last nine games but they will be feeling pretty good after snapping a three-game skid with a 116-114 road win at Milwaukee on Friday. Devin Booker led the team with 29 points and seven assists, TJ Warren added 19 points while DeAndre Ayton chipped in with 17 points. As a team, the Suns shot 50 percent from the field and nine of 26 from the 3-point line and had seven players finish in double figures as they took down the red-hot Bucks thanks to Jamal Crawford who drained the drained the game-winner jumper with 0.8 seconds left on the clock. With the much-needed win, Phoenix improved to 4-14 on the season and 1-8 on the road.

Meanwhile, the Detroit Pistons have been in great form with five wins in their last seven games and they will be looking to stay hot after sneaking past the Rockets in a 116-111 overtime win on Friday. Blake Griffin led the team with 28 points, nine rebounds and four assists, Andre Drummond added 23 points with 20 rebounds and five blocks while Reggie Jackson chipped in with 22 points and six assists. As a team, the Pistons shot 45 percent from the field and seven of 27 from the 3-point line but it was their defense in overtime which was the difference as they held the Rockets’ James Harden scoreless in overtime to escape with the narrow win. With the win, Detroit improved to 9-7 overall and 5-3 at home.

The Suns have been one of the worst teams in the league but they were able to put it all together in their upset win over the Bucks on Friday. The Pistons have been flying under the radar lately with five wins in their last seven games and they will be full of confidence following their overtime win over the Rockets. You get the feeling that the Suns could surprise us again and pull off another big upset, but they are 0-7 ATS in the last seven meetings in Detroit so I’m backing that trend to continue here as the Pistons pull away late.