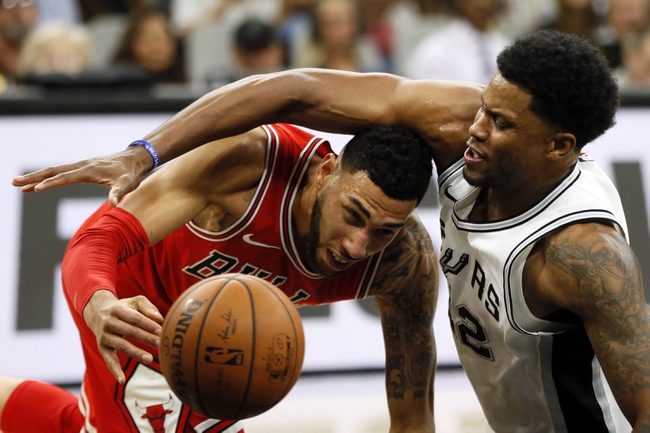 The San Antonio Spurs and the Chicago Bulls duke it out at the United Center on Monday night.

The San Antonio Spurs have been in a real slump as they’ve won just three of their last 11 games and they will be looking to bounce back after falling to the Bucks in a 135-129 road loss on Saturday. DeMar DeRozan led the team with 34 points and seven assists, Bryn Forbes added 18 points, David Bertans scored 17 points off the bench while LaMarcus Aldridge chipped in with 15 points. As a team, the Spurs shot 53 percent from the field and 10 of 21 from the 3-point line as they rallied to overcome an early 15-point deficit only to get chased down despite leading by as many as 11 points in the fourth quarter. The Spurs just had no answer for the Bucks’ Giannis Antetokounmpo who racked up 34 points with 18 rebounds and eight assists.

Meanwhile, the Chicago Bulls have been in a rut as they’ve lost six of their last seven games and they will be hoping to avoid a third straight defeat after falling to the Timberwolves in a 111-96 road loss on Saturday. Zach LaVine led the team with 28 points and four assists, Jabari Parker added 27 points while Justin Holiday racked up 14 points with 11 rebounds and five assists. As a team, the Bulls shot 40 percent from the field and 10 of 33 from the 3-point line as they took a one-point lead going into halftime, but they were playing on zero days rest and it showed in the second half where they were outscored by 62-46. There was just no stopping the Timberwolves’ Karl-Anthony Towns who had a monster night of 35 points with 22 rebounds and six assists.

The Spurs would usually have no problem taking care of business and getting the road win against the lesser teams in the league like the Bulls, but they’ve really cooled off lately and will be kicking themselves after squandering that lead against the Bucks on Saturday. The Bulls may not get a better chance to pull off the upset against the Spurs, but they’ve been in worse form and have yet to beat a team with a winning record. A minor upset is on the cards if the Bulls start well, but in this spot I’d rather side with the more reliable Spurs to bounce back here.