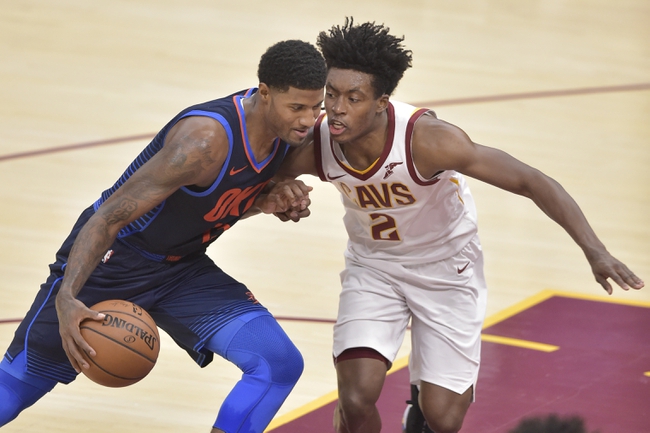 The Cleveland Cavaliers pay a visit to the Oklahoma City Thunder at the Chesapeake Energy Arena on Wednesday night.

The Cleveland Cavaliers have won just four of their first 19 games but they were aiming for a third straight win before getting stopped by the Timberwolves in a 102-95 home loss on Monday. Kyle Korver drained six 3-pointers to lead the team with 22 points off the bench, Rodney Hood added 20 points while Tristan Thompson chipped in with 16 points, 11 rebounds and three assists. As a team, the Cavaliers shot 41 percent from the field and 10 of 31 from the 3-point line but they could never get closer than four points after falling behind by 12 points late in the third quarter.

Meanwhile, the Oklahoma City Thunder have been in great form as they’ve won five of their last seven games but they will be looking to bounce back after having their two-game win streak snapped by the Nuggets in a 105-98 home loss on Saturday. Paul George led the team with 24 points, 11 rebounds and three assists, Dennis Schroder added 18 points off the bench while Russell Westbrook racked up a triple-double of 16 points with 10 rebounds and 12 assists. As a team, the Thunder shot just 35 percent from the field and nine of 39 from the 3-point line and that’s largely thanks to Westbrook who shot just six of 23 from the field and one of 12 from the 3-point line but the game was already lost when the Thunder fell behind by 25 points in the second quarter.

The Cavaliers looked like they were turning their season around with a couple of wins on the trot, but their loss to the Timberwolves stopped their momentum. The Thunder have been on a tear as they’ve won 12 of their last 15 games and one of those wins came against the Cavaliers in a 95-86 road win on Nov 7. With that being said, I expect the Thunder and Westbrook in particular to bounce back from their last loss with a big win at home where they’ve won six of their last seven.