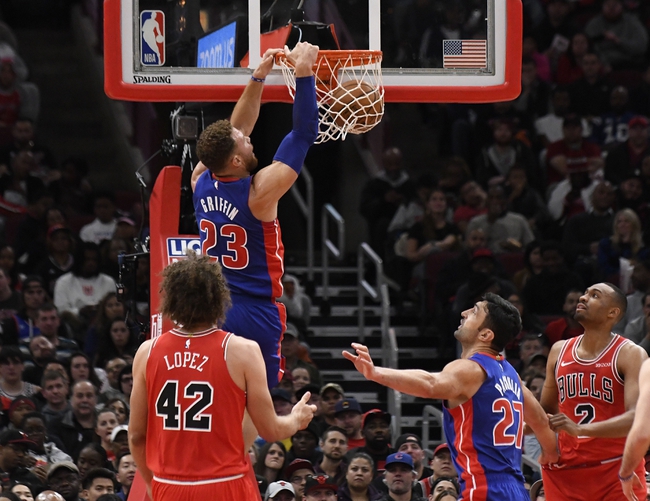 The Chicago Bulls and the Detroit Pistons duke it out at Little Caesars Arena on Friday night.

The Chicago Bulls have lost eight of their last nine games and they will be hoping to snap a four-game skid after falling to the Bucks in a 116-113 road loss on Wednesday. Jabari Parker racked up 24 points with eight rebounds and five assists, Zach LaVine added 24 points with nine rebounds and seven assists while Ryan Arcidiacono chipped in with 22 points, four assists and five steals. As a team, the Bulls shot 44 percent from the field and 11 of 37 from the 3-point line as they poured on 40 points in the first quarter to gain an early 12-point lead before falling just short as the Bucks’ Khris Middleton drained the game-winning 3-pointer with 5.2 seconds left in the fourth quarter to steal the game. With the loss, Chicago dropped to 5-17 overall and 2-8 on the road.

Meanwhile, the Detroit Pistons have been in great form as they’ve won seven of their last nine games and they will be aiming for a third straight victory after taking down the Knicks in a 115-108 home win on Tuesday. Blake Griffin led the team with 30 points and five assists while Reggie Jackson and Stanley Johnson each scored 21 points. As a team, the Pistons shot 47 percent from the field and seven of 24 from the 3-point line as they cruised to victory in a game where they led by as many as 18 points in the fourth quarter, all without the help of Andre Drummond who finished with just six points in 30 minutes. With the win, Detroit improved to 11-7 overall and 7-3 at home.

The Bulls have lost four straight but three of those losses came by seven points or less and they were close to pulling off a big upset against the Bucks in their last outing. However, the Pistons have been in great form as they’ve taken full advantage a soft stretch in their schedule as they’re racking up wins over the lesser teams like the Cavaliers, Suns and Knicks. With that being said, I expect the Pistons to take care of business once again with a win and cover at home over the pesky Bulls.