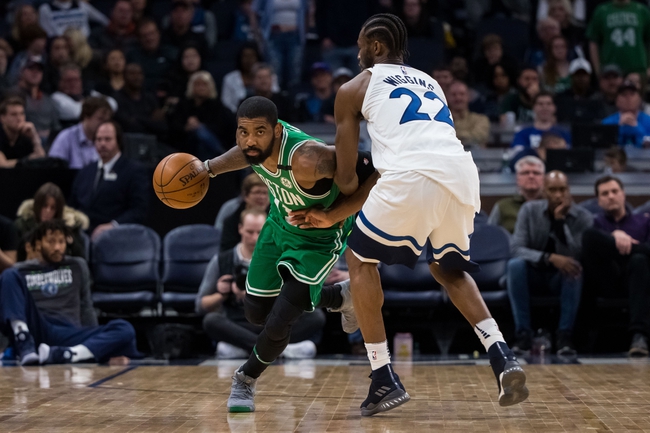 The Boston Celtics and the Minnesota Timberwolves duke it out at the Target Center on Saturday night.

The Boston Celtics have started to turn the corner with three wins in their last four outings and they will be aiming for a third straight victory after last night’s 128-95 blowout against the Cavaliers. Kyrie Irving drained five 3-pointers to lead the team with 29 points on 11 of 15 shooting, Marcus Morris added 15 points while Gordon Hayward chipped in with 14 points and four assists off the bench. As a team, the Celtics shot 53 percent from the field and 17 of 31 from the 3-point line as they took a 10-point lead going into halftime before putting the game out of reach in the third quarter where they outscored the Cavaliers by 39-20. With the win, Boston improved to 12-10 overall and 6-3 at home.

Meanwhile, the Minnesota Timberwolves have been in great form as they’ve won seven of their last nine games and they will be gunning for a season-high fifth straight win after taking down the Spurs in a 128-89 home win on Wednesday. Robert Covington led the team in scoring with 21 points, Karl-Anthony Towns and Derrick Rose each scored 16 points while Taj Gibson chipped in with 13 points. As a team, the Timberwolves shot 50 percent from the field and 18 of 41 from the 3-point line and they never looked in danger after taking the game over in the second quarter where they outscored the Spurs by 29-9. With the win, Minnesota improved to 11-11 overall and 9-3 at home.

The Celtics are still working through their player rotation issues and this will be their second game in as many nights, but they took care of business early last night against the lowly Cavaliers which allowed them to rest their starters. The Timberwolves have been in a nice groove lately and they took apart the Spurs easily on Wednesday so I’m giving them the edge over the Celtics who have struggled on the road lately.