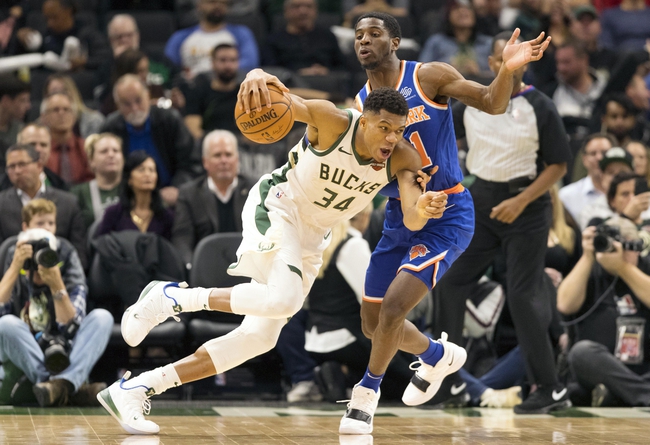 The Milwaukee Bucks have been in a groove as they’ve won five of their last seven games but they will be breathing a major sigh of relief after escaping with a narrow 116-113 win over the lowly Bulls on Wednesday. Giannis Antetokounmpo led the way with 36 points, 11 rebounds and eight assists, Malcolm Brogdon added 24 points with six assists while Khris Middleton chipped in with 17 points and four assists. As a team, the Bucks shot 49 percent from the field and 12 of 35 from the 3-point line as they held off the Bulls thanks largely to Middleton who drained the clutch 3-pointer with just 5.2 seconds left in the fourth quarter. With the win, Milwaukee improved to 15-6 overall and 11-2 at home.

Meanwhile, the New York Knicks have won just three of their last 11 games and they will be hoping to avoid a third straight defeat after falling to the 76ers in a 117-91 road loss on Wednesday. Mario Hezonja and Enes Kanter each scored 17 points while Damyean Dotson chipped in with 16 points off the bench but no other player finished in double figures. As a team, the Knicks shot just 34 percent from the field and six of 29 from the 3-point line and never even threatened after allowing the 76ers to outscore them by 41-27 in the first quarter. With the loss, New York dropped to 7-16 on the season and 4-10 on the road.

The Bucks have been in fine form lately but they certainly weren’t convincing in their narrow home win over the Bulls in their last outing. The Knicks seem to have cooled off from their little three-game win streak and they didn’t look great in their loss to the 76ers on Wednesday. The Bucks have already beaten the Knicks by 11 points back on Oct 22 and I’m expecting a similar result as the Bucks should be too good once again.