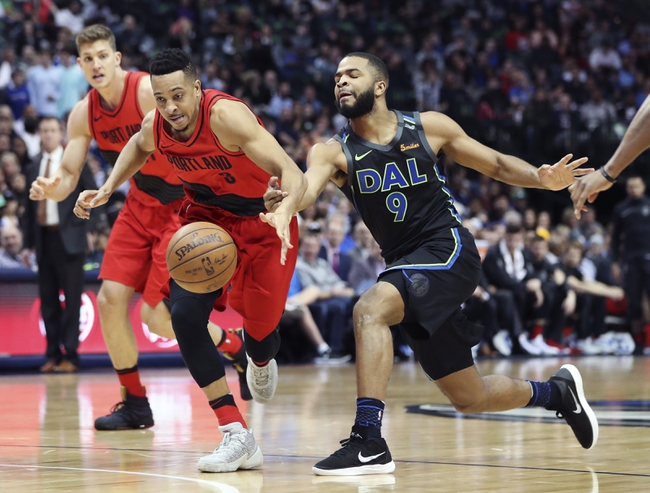 The Portland Trailblazers and the Dallas Mavericks do battle at the American Airlines Center on Tuesday night.

The Portland Trailblazers have been in a real funk lately as they’ve lost five of their last six games and they will be hoping to avoid a third straight defeat after falling to the Spurs in a 131-118 road loss on Sunday. Damian Lillard led the team with 37 points and 10 assists, CJ McCollum added 24 points, Al-Farouq Aminu scored 20 points whie Jusuf Nurkic chipped in with 16 points and five assists. As a team, the Trailblazers shot a healthy 52 percent from the field and 12 of 29 from the 3-point line but their defensive struggles continued as they allowed the Spurs to shoot a ridiculous 60 percent from the field. With the loss, Portland dropped to 13-10 overall and 5-6 on the road.

Meanwhile, the Dallas Mavericks have been on a tear lately as they’ve won eight of their last 10 games and they will be looking to stay hot after taking down the red-hot Clippers in a 114-110 home win on Sunday. Harrison Barnes led the team in scoring with a season-high 30 points on 11 of 28 shooting, JJ Barea added 24 points and four assists off the bench while DeAndre Jordan chipped in with 16 points and a season-high 23 rebounds. As a team, the Mavericks shot 44 percent from the field and eight of 23 from the 3-point line as they escaped with the narrow win without the services of Luka Doncic who suffered a right hip strain on Friday.

I keep waiting for the Trailblazers to snap out of their funk with a big win but they’ve been struggling on the defensive end and just allowed 131 points to the struggling Spurs. On the other hand, the Mavericks have been one of the hottest teams in the league, especially at home where they’ve covered the spread in each of their last seven games, but they will likely be without Doncic again. I wouldn’t be surprised if the Trailblazers pulled off the minor upset here, but the Mavericks have been in a groove lately and they’re 8-3 ATS in the last 11 meetings overall so I'm sticking with the Mavericks at home in a shooutout.