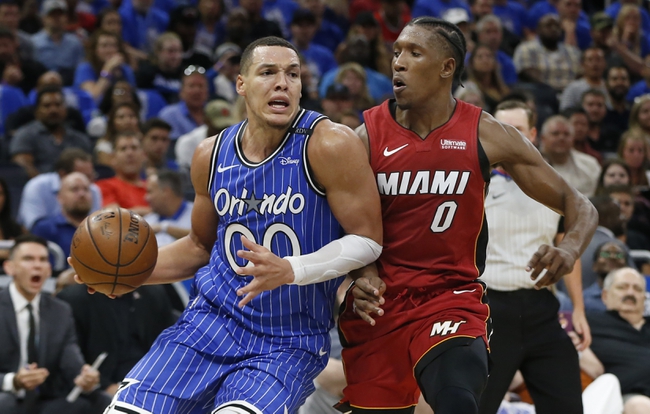 The Miami Heat play host to the Orlando Magic at the American Airlines Arena on Tuesday night.

The Orlando Magic have lost four of their last six games but they were able to avoid a third straight defeat with a 99-85 road win at Phoenix on Friday. Nikola Vucevic led the team with 25 points, 15 rebounds and three assists, Terrence Ross provided the spark off the bench with 21 points, Aaron Gordon scored 18 points while DJ Augustin chipped in with 16 points and six assists. As a team, the Magic shot 47 percent from the field and eight of 27 from the 3-point line but they really couldn’t pull away until the fourth quarter where they outscored the shorthanded Suns by 24-14. With the win, Orlando improved to 11-12 overall and 5-6 on the road.

Meanwhile, the Miami Heat have lost eight of their last 12 games but they will be aiming for a third straight victory after sneaking past the Jazz in a 102-100 home win on Sunday. Hassan Whiteside led the team with 23 points, 20 rebounds and three blocks, Josh Richardson and Kelly Olynyk scored 16 points apiece while Dwyane Wade chipped in with 15 points and eight assists. As a team, the Heat shot just 39 percent from the field and 13 of 31 from the 3-point line as they rallied back from a 19-point deficit with a 20-0 run before escaping with the narrow win on the back of clutch free throws from Wade with 3.2 seconds left. With the win, Miami improved to 9-13 overall and 5-8 at home.

The Magic were one of the surprise teams in the league but they’ve since cooled off a bit with four losses in their last six games and they weren’t too convincing in their win over the Suns who were without Devin Booker. The Heat have been in a slump lately but they certainly looked good in their comeback win over the Jazz so perhaps they may be turning the corner. These two teams last met in the season opener where the Magic won by 104-101 on Oct 17 and I’m expecting a similar result. The Magic are 6-2 ATS in the last eight meetings and 4-0 ATS in their last four road games so I’m taking Orlando with the points in this one.