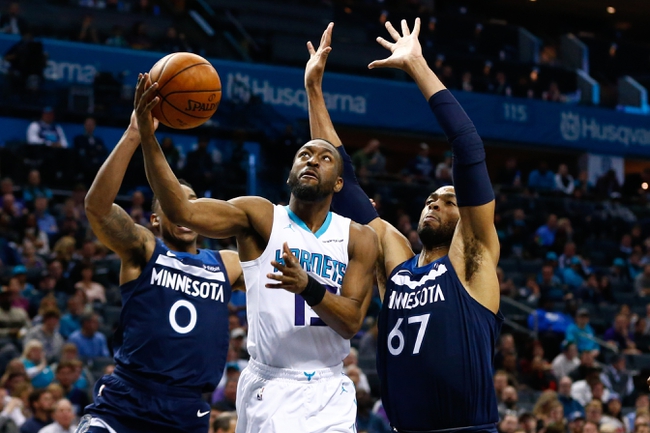 The Charlotte Hornets and the Minnesota Timberwolves duke it out at the Target Center on Wednesday night.

The Charlotte Hornets have lost six of their past 10 games and they will be hoping to turn things around and avoid a third straight defeat after falling to the Pelicans in a 119-109 home loss on Sunday. Frank Kaminsky led the team in scoring with 19 points off the bench, Miles Bridges added 16 points while Kemba Walker finished with just 13 points and five assists on five of 16 shooting. As a team, the Hornets shot 42 percent from the field and 10 of 36 from the 3-point line which just wasn’t enough to overcome the Pelicans’ Anthony Davis who dominated the game with 36 points, 19 rebounds, eight assists, two steals and two blocks. With the loss, Charlotte dropped to 11-12 overall and 8-5 at home.

Meanwhile, the Minnesota Timberwolves have been on a nice run lately as they’ve won five of their last six games and they will be looking to stay hot after taking down the Rockets in a 103-91 home win on Monday. Karl-Anthony Towns led the team with 24 points and 11 rebounds, Andrew Wiggins added 16 points while Taj Gibson chipped in with 15 points. The Timberwolves had six players finish in double figures as they shot 43 percent from the field and 11 of 22 from the 3-point line as a team, but the key to the win was actually their defense as they held the Rockets to just 29 points in the second half to win easily after trailing by 14 points at halftime. With the impressive win, Minnesota improved to 12-12 overall and 10-4 at home.

The Hornets have fallen off the pace lately and things will get a little tougher for them as they will be without Marvin Williams or a week after he injured his shoulder on Sunday. The Timberwolves have quietly been stringing together some nice wins lately and their defense was special against the talented backcourt of the Rockets in their win on Monday. These two teams have yet to clash this season but I have to give the edge to the red-hot Timberwolves who have been a much improved team ever since they moved on from that Jimmy Butler drama. The Timberwolves are 8-3 ATS in their last 11 home games and I think that trend continues as they should be too good against this shorthanded Hornets outfit.