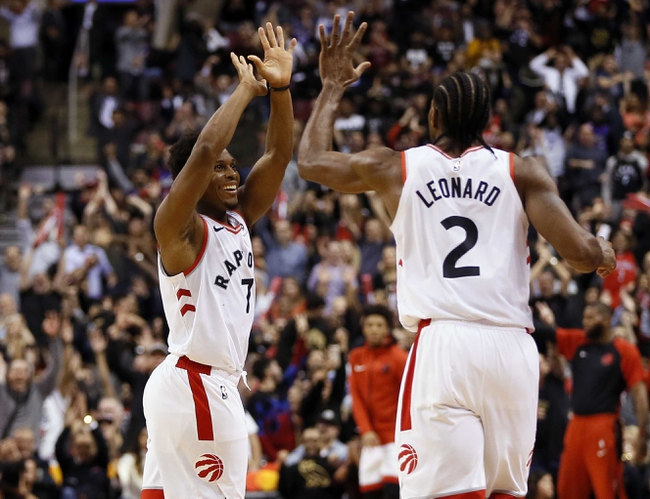 The Philadelphia 76ers and the Toronto Raptors collide at the Scotiabank Arena in NBA action on Wednesday night.

The Philadelphia 76ers have been in a nice groove lately as they’ve won eight of their last nine games and they will be aiming for a fifth straight victory after taking down the Grizzlies in a 103-95 home win on Sunday. JJ Redick led the team in scoring with 24 points on nine of 17 shooting, Jimmy Butler added 21 points, Ben Simmons racked up 19 points with 12 rebounds and six assists while Joel Embiid chipped in with 15 points and 14 rebounds. As a team, the 76ers shot 48 percent from the field and eight of 22 from the 3-point line but the key to the win was actually their defense, particularly against the Grizzlies’ duo of Mike Conley and Marc Gasol who finished with a combined 10 of 31 shooting from the field. With the win, Philadelphia improved to 17-8 overall and 13-1 at home.

Meanwhile, the Toronto Raptors have been the benchmark of the league since the season opener but they will be looking to bounce back after having their eight-game win streak snapped by the Nuggets in a 106-103 home loss on Monday. Kawhi Leonard led the way with 27 points on 10 of 19 shooting, Serge Ibaka added 15 points while Pascal Siakam chipped in with 14 points, but no other player finished in double figures. As a team, the Raptors shot just 46 percent from the field and an ugly 11 of 41 from the 3-point line so they could’ve done with a little more production from Kyle Lowry who finished with just five points on one of seven shooting. Defensively, the Raptors simply had no answer for the Nuggets’ Nikola Jokic who racked up a triple-double of 23 points with 11 rebounds and 15 assists. With the loss, Toronto dropped to 20-5 overall and 10-3 at home.

These two squads have already met this season and it was the Raptors who won by 129-112 at home back on Oct 30. The 76ers have been in great form lately so they could avenge that loss in this outing, but they’ve won just four of their 11 road games this season so it’s tough to back them against the Raptors who will be seething after having their eight-game win streak halted. This matchup looks close on paper, but the betting trends are one-sided as the 76ers are just 1-6 ATS in the last seven meetings in Toronto, so I’m going with the flow and taking the Raptors to bounce back at home.