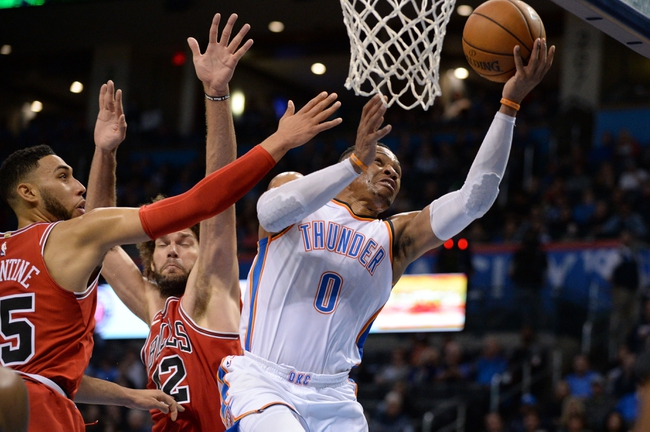 The Oklahoma City Thunder and the Chicago Bulls duke it out at the United Center in NBA action on Friday night.

The Oklahoma City Thunder have been on an absolute tear as they’ve won 16 of their last 19 games and the y will be gunning for a fifth straight win after taking down the Nets in a thrilling 114-112 road win on Wednesday. Paul George drained six 3-pointers to finish with a season-high 47 points with 15 rebounds and four assists, Russell Westbrook racked up a quiet triple-double of 21 points with 15 rebounds and 17 assists while Steven Adams chipped in with 15 points. As a team, the Thunder shot 43 percent from the field and 13 of 38 from the 3-point line as they struggled for most of the game, falling behind by as many as 23 points before rallying in the fourth quarter to steal the win on the back of a clutch 3-pointer from George. With the impressive win, OKC improved to 16-7 overall and 7-4 on the road.

Meanwhile, the Chicago Bulls have lost 11 of their last 12 games and they will be hoping to put a halt to a seven-game losing streak after falling to the Pacers in a 96-90 road loss on Tuesday. Lauri Markkanen led the team with 21 points and 10 rebounds, Justin Holiday added 15 points while Wendell Carter Jr. chipped in with 12 points, 13 rebounds and four assists. As a team, the Bulls shot just 39 percent from the field and 11 of 31 from the 3-point line as they seemed to be getting the better of the shorthanded Pacers as they led by as many as nine points in the first half, but they could never regain the lead after falling behind in the third quarter. With the loss, Chicago dropped to 5-20 on the season and 2-11 on the road.

The Thunder have probably been the most consistent team in the league lately and their confidence will be sky-high after rallying back from that 23-point deficit in their win over the Nets. Meanwhile, the Bulls just haven’t been able to buy a win lately and they’re just 4-9 ATS in their last 13 games overall. With that being said, the Thunder received a bit of a wake-up call in their last outing so they’ll want to come out fast in this one, so I’m taking them to stay hot with a win and cover in this one.