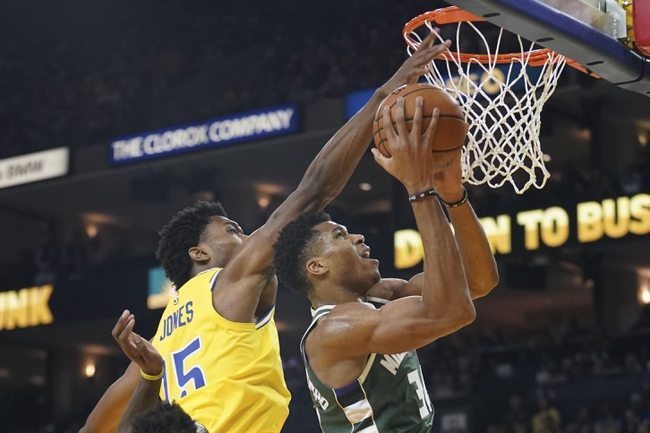 The Golden State Warriors pay a visit to the Milwaukee Bucks at the Fiserv Forum on Friday night.

The Golden State Warriors have won five of their last seven games and they will be gunning for a third straight victory after blowing past the Cavaliers in a 129-105 road win on Wednesday. Stephen Curry has been on a tear ever since he came back from that 11-game absence as he drained nine 3-pointers to lead the team with 42 points, Kevin Durant added 25 points with 10 rebounds and nine assists while Klay Thompson chipped in with 16 points. As a team, the Warriors shot a healthy 52 percent from the field and 18 of 34 from the 3-point line as they trailed by six points at halftime before outscoring the Cavaliers by 71-41 in the second half. With the easy win, Golden State improved to 17-9 overall and 6-7 on the road.

Meanwhile, the Milwaukee Bucks have won six of their last nine games and they will be looking to stay hot after taking down the Pistons in a 115-92 home win on Wednesday. Eric Bledsoe led the team with 27 points on 10 of 17 shooting, Giannis Antetokounmpo added 15 points with eight rebounds and five assists while Malcolm Brogdon chipped in with 14 points. As a team, the Bucks shot 46 percent from the field and 14 of 41 from the 3-point line and they never trailed after taking the lead early in the game. Khris Middleton sat out the game for personal reasons but is expected to be available on Friday. With the win, Milwaukee improved to 16-7 overall and 12-2 at home.

These two teams have already met once this season and it was the Bucks who dominated in a 134-111 road win on Nov 8. Behind 26 points from Bledsoe. The Warriors went through a bit of a slump following that game as they were without Curry but he’s back on the court and back to his best so this rematch should be a good one. It’s hard to split these two teams at this stage of the season but with the line where it is, I’m going to have to take the Bucks to complete the season-sweep with a win and cover at home.