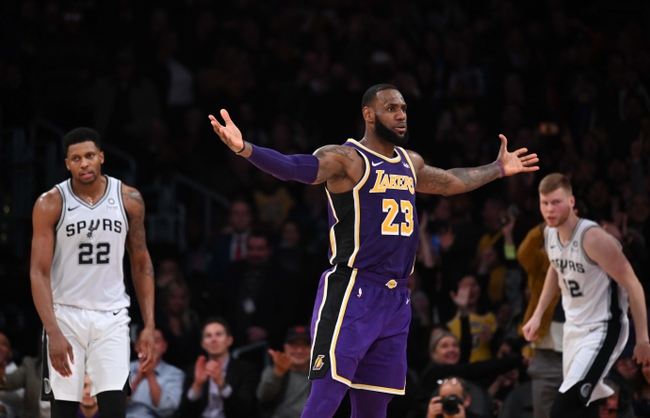 The San Antonio Spurs play host to LeBron James and the Los Angeles Lakers at the AT&T Center on Friday night.

The Los Angeles Lakers have won seven of their last nine games and they will be gunning for a season-high fifth straight victory after taking down the Spurs in a 121-113 home win on Wednesday. LeBron James led the way with 42 points, five rebounds and six assists, Kyle Kuzma added 22 points with nine rebounds and five assists while Lonzo Ball chipped in with 14 points and nine assists. As a team, the Lakers shot 47 percent from the field and 14 of 39 from the 3-point line as they held off the Spurs thanks largely to James who drained a trio of 3-pointers to score 20 of his 42 points in the fourth quarter. With the win, Los Angeles improved to 15-9 overall and 10-4 at home where they have won eight of their last nine.

Meanwhile, the San Antonio Spurs have really been in a funk for a while now as they’ve won just five of their last 17 games following Wednesday’s loss to the Lakers. DeMar DeRozan led the team with 32 points on 12 of 27 shooting, Rudy Gay supported him with 31 points on 12 of 21 shooting while LaMarcus Aldridge chipped in with 21 points and nine rebounds. As a team, the Spurs shot 44 percent from the field and just seven of 27 from the 3-point line as they seemingly had control after leading by eight points early in the fourth quarter before LeBron took over in front of a raucus home crowd. With the loss, San Antonio dropped to 11-14 overall and 4-10 on the road where they’ve now lost three in a row.

The Lakers have been on a roll lately, especially at home where they’ve won eight of their last nine but they haven’t been nearly as successful on the road. The Spurs will be eager to exact revenge in this one, but they just haven’t looked like themselves so it’s hard to feel confident backing them. The Spurs are 16-7 ATS in their last 23 home games but I’m sticking with the Lakers who look like value as slight underdogs in this one.