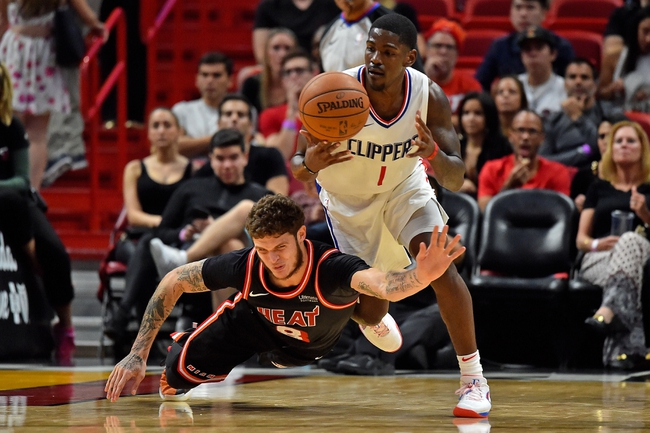 The Miami Heat and the Los Angeles Clippers duke it out at the STAPLES Center on Saturday night.

The Miami Heat haven’t been at their best lately but they’re starting to turn things around with three wins in their last four games after last night’s 115-98 win at Phoenix. Bam Adebayo led the team with a career-high 22 points with 10 rebounds, Justise Winslow added 20 points, eight rebounds and six assists off the bench while Goran Dragic returned from an eight-game absence to chip in with 11 points and 10 assists. As a team, the Heat shot 48 percent from the field and 15 of 37 from the 3-point line as they cruised to victory against the shorthanded Suns in a game where they led by as many as 22 points. With the win, Miami improved to 10-14 overall and 5-5 on the road.

Meanwhile, the Los Angeles Clippers have been in great form as they’ve won 10 of their last 13 games but they will be looking to bounce back after falling to the Grizzlies in a 96-86 road loss on Wednesday. Boban Marjanovic led the team in scoring with 19 points in just 13 minutes off the bench, Danilo Gallinari added 17 points while Lou Williams chipped in with 12 points and seven assists. As a team, the Clippers shot just 33 percent from the field and eight of 23 from the 3-point line while committing a total of 19 turnovers as they were held to their lowest point total for the season. Tobias Harris was particularly disappointing as he scored just seven points on two of 13 shooting. With the loss, Los Angeles fell to 16-8 on the season and 7-7 on the road.

The Heat look like they might be starting to turn the corner with three wins in their last four outings, but I still don’t trust them, certainly not as much as I do the Clippers who have quietly been one of the most consistent teams this season. The Heat are a much more complete team with Dragic back in the lineup, but I’m sticking with the more reliable Clippers to stay hot at home where they’re 8-1 ATS in their last nine games.