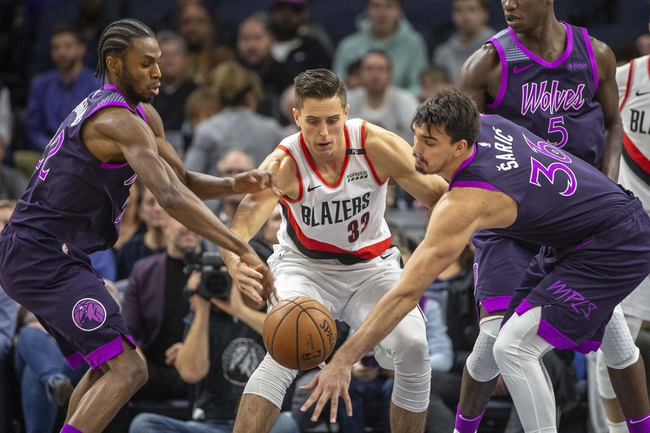 The Minnesota Timberwolves and the Portland Trailblazers do battle at the Moda Center on Saturday night.

The Minnesota Timberwolves have been in a real groove lately as they’ve won six of their last seven games and they will be gunning for a third straight victory after blowing past the Hornets in a 121-104 home loss on Wednesday. Karl-Anthony Towns led the team with 35 points, 12 rebounds and six blocks, Andrew Wiggins added 26 points with five assists while Robert Covington chipped in with 17 points. As a team, the Timberwolves shot a healthy 53 percent from the field and 12 of 24 from the 3-point line as they battled with the Hornets for three closely contested quarters before running away with in the fourth quarter where they outscored the Hornets by 35-18. With the win, Minnesota improved to 13-12 overall and 11-4 at home.

Meanwhile, the Portland Trailblazers have been in a bit of a funk as they’ve lost six of their last eight games but they will be feeling a little better after putting a halt to a three-game skid with a 108-86 home win over the Suns on Thursday. Damian Lillard led the team with 25 points and eight assists, Jake Layman provided the spark off the bench with 24 points on 10 of 13 shooting while Zach Collins chipped in with 10 points but no other player finished in double figures. As a team, the Trailblazers shot 48 percent from the field and nine of 27 from the 3-point line as they cruised to victory after outscoring the Suns by 34-9 in the first quarter. CJ McCollum sat out the game with an ankle injury and his status for Saturday is uncertain.

The Timberwolves have really been on a nice run since trading away Jimmy Butler but they’ve been a poor road team for a few years now and this season is now different as they’ve won just two of their first 10 road games. The Trailblazers have been in a slump themselves, but they were clinical in their easy win over the Suns on Thursday, so perhaps that will get them back on track. The Trailblazers are only 1-8 ATS in their last nine games overall, but I think they can snap out of their funk with a hard-fought win and cover in this one.