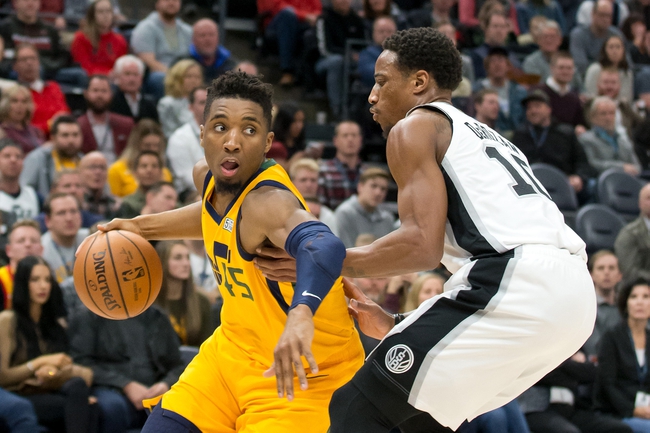 The Utah Jazz pay a visit to the AT&T Center to battle the San Antonio Spurs on Sunday night.

The Utah Jazz have started to build some nice momentum with five wins in their last seven outings and they will be aiming for a third straight victory after blowing past the Rockets in a 118-91 rout on Thursday. Donovan Mitchell scored just six points while Rudy Gobert was ejected from the game after just three minutes, but the Jazz still cruised to win thanks to 24 points from Derrick Favors, 18 points from Joe Ingles and 15 points from Dante Exum. As a team, the Jazz shot 50 percent from the field but it was on the defensive end where they shone as they held the Rockets to just 38 percent shooting before putting them away in the third quarter where they outscored them by 38-11. With the win, Utah improved to 13-13 overall and 4-6 at home.

Meanwhile, the San Antonio Spurs haven’t won consecutive games since the start of November but they will have another chance after taking down the Lakers in a 133-120 home win on Friday. DeMar DeRozan led the team with 36 points, eight rebounds and nine assists, Jakob Poeltl and LaMarcus Aldridge each had 14 points while Davis Bertans chipped in with 13 points. As a team, the Spurs shot 50 percent from the field and 13 of 31 from the 3-point line as they were a step behind the Lakers for most of the game until the fourth quarter where they outscored the Lakers by 44-21 to run away with it. With the much-needed win, San Antonio improved to 12-14 overall and 8-4 at home.

It’s hard to know what you’re going to get from the Spurs because they really haven’t looked like themselves since early November. The Spurs played great basketball to avenge their loss to the Lakers but they will have to be even better when they take on the Jazz who beat them by 139-105 on Tuesday. The Spurs are a solid 17-7 ATS in their last 24 home games but they’ve shown almost no consistency for weeks now so I’m sticking with the Jazz to stay hot with a win and cover here.