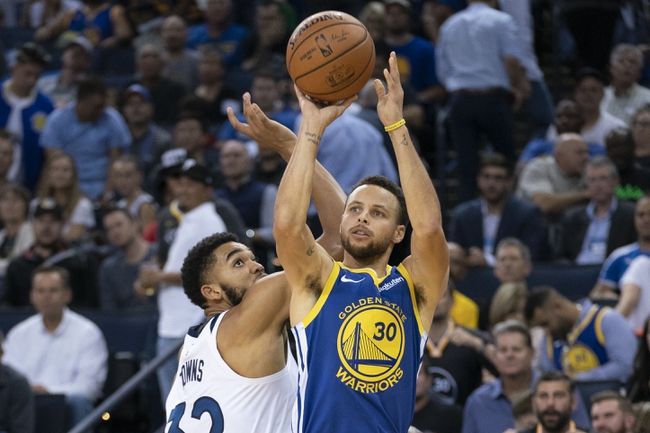 The Golden State Warriors play host to the Minnesota Timberwolves at the Oracle Arena on Monday night.

The Minnesota Timberwolves have been in great form as they’ve won six of their past eight games but they will be looking to bounce back after having their two-game win streak snapped by the Trailblazers in a 113-105 road loss on Saturday. Andrew Wiggins led the team with 20 points, Karl-Anthony Towns added 19 points with 10 rebounds while Derrick Rose chipped in with 18 points and nine assists on nine of 25 shooting. As a team, the Timberwolves shot 44 percent from the field and seven of 16 from the 3-point line but in a tightly contested game, it was the Trailblazers who closed the game on a 10-0 run in the final 1:41 to steal the game late. With the loss, Minnesota fell to 13-13 on the season and 2-9 on the road.

Meanwhile, the Golden State Warriors have been on a nice roll lately as they’ve won six of their past eight games and they will be looking to build on their current three-game win streak after taking down the Bucks in a 105-95 road win on Friday. Stephen Curry led the team with a quiet game of 20 points and eight assists, Klay Thompson added 20 points with six assists and four steals while Andre Iguodala chipped in with 15 points. As a team, the Warriors shot 44 percent from the field and 19 of 46 from the 3-point line as they clogged the paint and capitalized on the poor 3-point shooting from the Bucks. With the win, Golden State improved to 18-9 on the season and 7-7 on the road.

The Timberwolves have been in decent form lately but their road struggles continue to hurt them as they’re coming into this one fresh off another road loss after falling to the Trailblazers on Saturday. The Warriors have been in great form lately as they’ve been able to roll through teams while shorthanded and the good news is that Draymond Green is expected to return to the starting lineup after missing 11 games with a sprained toe. The Warriors beat the Timberwolves in their own building by 116-99 in the team’s last meeting on Nov. 2 and I’m expecting a similar result with the Warriors back to full strength.