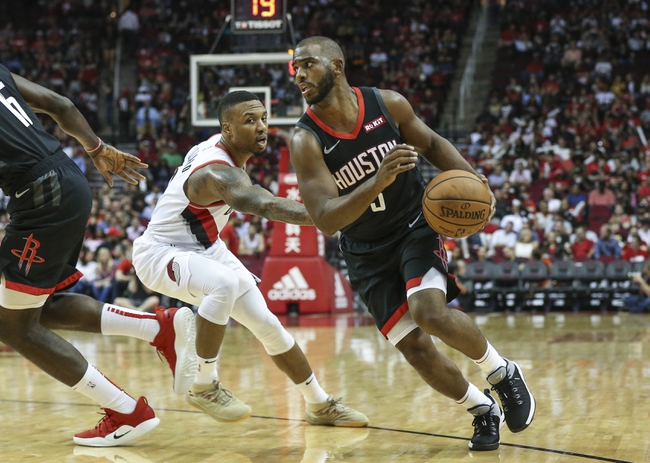 The Portland Trailblazers and the Houston Rockets duke it out at the Toyota Center on Tuesday night.

The Portland Trailblazers look to be turning the corner after losing six of seven as they will be aiming for a third straight victory after beating the Timberwolves in a 113-105 home win on Saturday. Damian Lillard led the way with 28 points, eight rebounds and six assists, Jusuf Nurkic added 22 points with 11 rebounds and four assists while CJ McCollum chipped in with 19 points. As a team, the Trailblazers shot 47 percent from the field and 10 of 33 from the 3-point line as they fell behind by six points with 3:37 left on the clock before closing the game on a 17-3 run to steal the game. With the win, Portland improved to 15-11 overall and 10-4 at home.

Meanwhile, the Houston Rockets have been in a real slump as they’ve lost seven of their last nine games and they will be hoping to snap a three-game skid after falling to the Mavericks in a 107-104 road loss on Sunday. James Harden led the team with 35 points and eight assists, Chris Paul added 23 points with eight assists while Clint Capela and Eric Gordon each scored 12 points. As a team, the Rockets shot 45 percent from the field and 15 of 47 from the 3-point line but they still couldn’t get it done despite leading by eight points late in the fourth quarter. The Rockets managed just 20 points in the fourth quarter and no one could stop the Mavericks’ Luka Doncic who scored 11 straight points. With the loss, Houston dropped to 11-14 on the season and 6-9 on the road.

The Trailblazers will be high on confidence following their much-needed comeback win over the Timberwolves on Saturday and another win here would have them on a nice three-game win streak. The Rockets just haven’t been able to buy a win lately and they will still be kicking themselves following their fourth quarter meltdown against the Mavericks on Sunday. These teams last met on Oct 30 and it was the Trailblazers who won by 104-85. I know the Rockets need this win more, but they just look disinterested at times so I'm sticking with the Trailblazers with the points in this one.