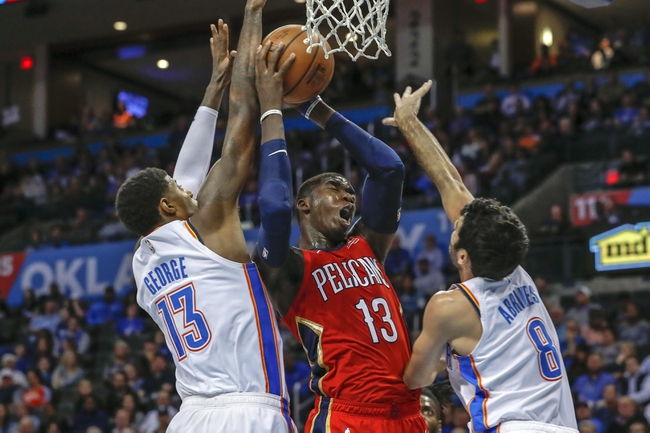 The Oklahoma City Thunder have been in great form as they’ve won five of their last six games and they will be looking to stay hot after taking down the Jazz in a 122-113 home win on Monday. Paul George led the team with 31 points on eight of 10 shooting, Dennis Schroder provided the spark off the bench with 23 points and six assists, Steven Adams scored 22 points while Russell Westbrook racked up a quiet triple-double of 12 points with 11 rebounds and 10 assists. As a team, the Thunder shot 50 percent from the field and eight of 21 from the 3-point line as they dominated the Jazz for most of the game to lead by as many as 29 points before taking their foot off the gas in the fourth quarter. With the easy win, Oklahoma City improved to 17-8 on the season and 10-3 at home.

Meanwhile, the New Orleans Pelicans have been in rough shape as they’ve lost eight of their last 12 games and they will be hoping to bounce back after falling to the Celtics in a 113-100 road loss on Monday. Anthony Davis led the way with 41 points on 17 of 34 shooting while Julius Randle added 20 points with 11 rebounds and four assists, but no other player scored more than eight points. As a team, the Pelicans shot just 44 percent from the field and eight of 26 from the 3-point line but playing on the second night of a back to back set, the Pelicans just couldn’t hang with the resurgent Celtics who pulled away in the fourth quarter. With the loss, New Orleans fell to 14-15 on the season and 4-11 on the road.

These two teams have already met once this season and it was the Thunder who won by 122-116 back on Nov 5. The Thunder have been one of the most consistent teams in the league since that meeting and they are a dominant 11-4 ATS in the last 15 meetings in New Orleans, so even though the Pelicans are playing at home, I’m sticking with the Thunder who look like decent value as slight road favorites in this one.