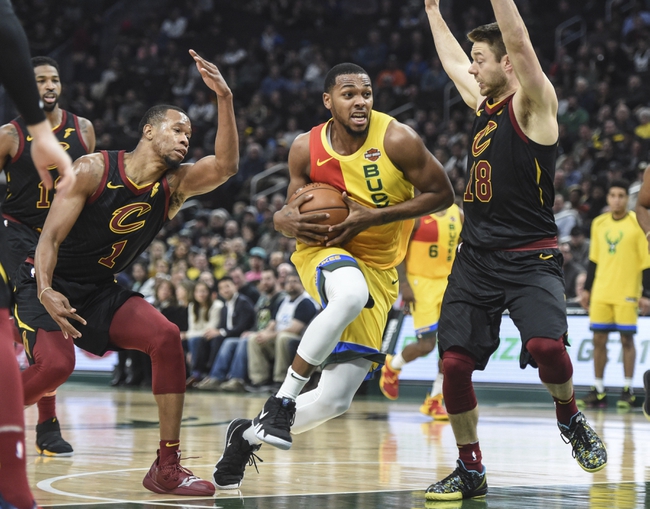 The Milwaukee Bucks pay a visit to the Cleveland Cavaliers at the Quicken Loans Arena on Friday night.

The Milwaukee Bucks have been very inconsistent as they’ve split their last 10 games and they will be hoping to bounce back after falling to the Pacers in a 113-97 road loss on Wednesday. Eric Bledsoe led the team with a season-high 26 points and six assists but he didn’t get a lot of support from his teammates as Brook Lopez added 15 points while Giannis Antetokounmpo chipped in with 12 points, 10 rebounds and seven assists. As a team, the Bucks shot just 41 percent from the field and 11 of 43 from the 3-point line as they were outworked by the shorthanded Pacers in just about every facet of the game.  Antetokounmpo just didn’t look like himself as he was plagued with foul trouble and the Bucks just never threatened after falling behind by 21 points early in the third quarter. With the loss, Milwaukee dropped to 18-9 on the season and 5-6 on the road.

Meanwhile, the Cleveland Cavaliers have been one of the worst teams in the league all season but they’ve split their last six games and will be looking to build on Wednesday’s 113-106 home win over the Knicks. Jordan Clarkson led the team with 28 points off the bench, Rodney Hood added 23 points while Collin Sexton chipped in with 19 points. As a team, the Cavaliers shot 47 percent from the field and 10 of 34 from the 3-point line as they rallied in the fourth quarter for the narrow win after squandering a 21-point second quarter lead. With the narrow win, Cleveland improved to 7-21 on the season and 5-10 at home.

Head to head, the over is 5-1 in the last six meetings in Cleveland and the home team is 3-0-1 ATS in the last four meetings.

The Cavaliers sprung to life for their old teammate Matthew Dellavedova in their win over the Knicks but they’ll need to replicate that effort to stand a chance the Bucks who are coming off a bad loss to the Pacers. These two teams met back on Tuesday and it was the Bucks who rolled to a 108-92 home win. The Bucks are also 8-2 ATS in their last 10 games following a loss and I expect them to bounce back with an easy win and cover in this one.