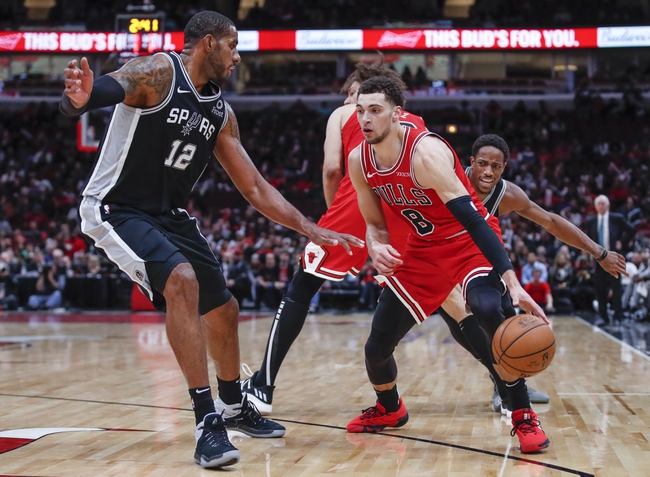 The Chicago Bulls and the San Antonio Spurs collide at the AT&T Center on Saturday night.

The Chicago Bulls have been in a real slump as they’ve lost 10 of their last 11 games and they will be hoping to put a halt to a three-game skid after falling to the Magic in a 97-91 loss at Mexico City on Thursday. Zach LaVine led the team with 23 points and five assists, Justin Holiday added 18 points while Bobby Portis chipped in with 15 points off the bench. As a team, the Bulls shot 47 percent from the field and 10 of 18 from the 3-point line as they found themselves deadlocked with the Magic at 91-91 with less than 30 seconds left until the Magic closed the game on a decisive 6-0 run to pull away late.

Meanwhile, the San Antonio Spurs have been below their best this season but they look to be turning the corner as they will be aiming for a season-high fifth straight victory after taking down the Clippers in a 125-87 home win on Thursday. LaMarcus Aldridge led the team with 27 points on 12 of 14 shooting, Rudy Gay added 21 points on eight of 10 shooting while DeMar DeRozan chipped in with 14 points and seven assists. As a team, the Spurs shot a healthy 57 percent from the field and 10 of 22 from the 3-point line as they jumped out to an early double-digit lead that would balloon out in the second half where they outscored the Clippers by 59-30. With the dominant win, San Antonio improved to 15-14 on the season and 11-4 at home.

The Bulls haven’t been able to buy a win lately but they weren’t too bad in their narrow loss to the Magic on Thursday. However, while the Spurs have gone through their slumps this season, they’re in a groove now with four straight wins especially at home where they have won 11 of 15 games. The Spurs are also 20-7 ATS in their last 27 home games and 4-0-1 ATS in their last five games overall so I’m taking them to stay hot with another win and cover here.