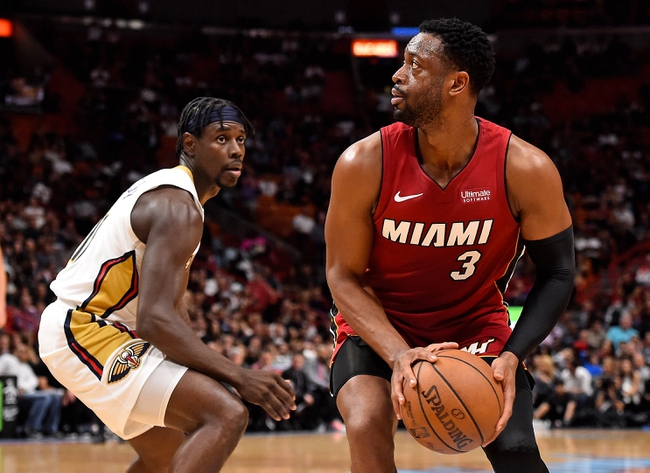 The New Orleans Pelicans play host to the Miami Heat at the Smoothie King Center on Sunday night.

The Miami Heat have been in decent shape as they’ve won five of their last eight games and they will be looking to build on Friday’s 100-97 win at Memphis. Josh Richardson led the team with 18 points and seven assists, Kelly Olynyk added 18 points and five assists off the bench while Tyler Johnson chipped in with 17 points and four assists. As a team, the Heat shot 43 percent from the field and 15 of 39 from the 3-point line but they really couldn’t get it going until the fourth quarter w here they went on a decisive 13-2 run to pull away late. With the win, Miami improved to 12-16 overall and 7-7 on the road. Dwyane Wade sat out Friday with general soreness and is currently listed as questionable for Sunday.

Meanwhile, the New Orleans Pelicans have split their last 10 games but they will be feeling pretty good after taking down the Thunder in a 118-114 home win on Wednesday. Anthony Davis led the team with a game-high 44 points with 18 rebounds and two assists, Julius Randle added 22 points with 12 rebounds while Jrue Holiday added 20 points with 10 assists. As a team, the Pelicans shot 46 percent from the field and a miserly four of 18 from the 3-point line but they outrebounded the Thunder by 56-39 to escape with the win to improve to 15-15 overall and 11-4 at home.

The Heat haven’t been at their absolute best lately but they looked good in their narrow win over the Grizzlies on Friday. The Pelicans haven’t been a pillar of consistency themselves as they’ve alternated wins and losses over 10 straight games but they played well in their win over the red-hot Thunder and have been tough to beat at home all season. This could be a close one, but the Pelicans haven’t played since Wednesday and I have them pulling away late for the win and cover at home.