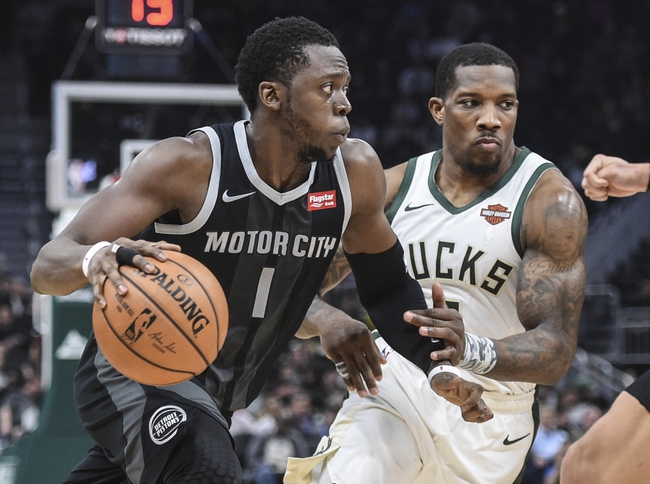 The Milwaukee Bucks and the Detroit Pistons duke it out at Little Caesars Arena on Monday night.

The Milwaukee Bucks have been in decent shape with four wins in their last six games and they will be aiming to stay hot after taking down the Cavaliers in a 114-102 road win on Friday. Giannis Antetokounmpo matched a career-high with 44 points on 14 of 19 shooting, Brook Lopez added 19 points while Eric Bledsoe chipped in with 16 points and six assists. As a team, the Bucks shot 42 percent from the field and 12 of 41 from the 3-point line as they easily took care of the lowly Cavaliers despite missing two key starters in Khris Middleton who sat out with a sprained right finger and Malcolm Brogdon who sat out with a sore left hamstring. With the win, Milwaukee improved to 19-9 overall and 6-6 on the road.

Meanwhile, the Detroit Pistons have fallen off the pace a bit lately but they will be feeling pretty good after snapping a six-game skid with a 113-104 home win over the Celtics on Saturday. Blake Griffin led the way with 27 points, eight rebounds and six assists, Andre Drummond added 19 points with 20 rebounds and five blocks while Reggie Bullock chipped in with 15 points. As a team, the Pistons shot 48 percent from the field but it was their defense in the second half that was the difference as they held the Celtics to just 41 percent shooting. With the much-needed win, Detroit improved to 14-13 overall and 10-6 at home.

Middleton has been ruled out for Monday with a right finger sprain while Brogdon is currently listed as questionable with soreness in his hamstring so the Bucks won't be at full strength. The Pistons haven't been at their best lately but they looked great in their impressive win over the red-hot Celtics on Saturday. This one could go either way, but the Bucks are just 5-12 ATS in their last 17 road games and they're also shorthanded for this meeting, so I'm going with the Pistons to get the win at home in this one.