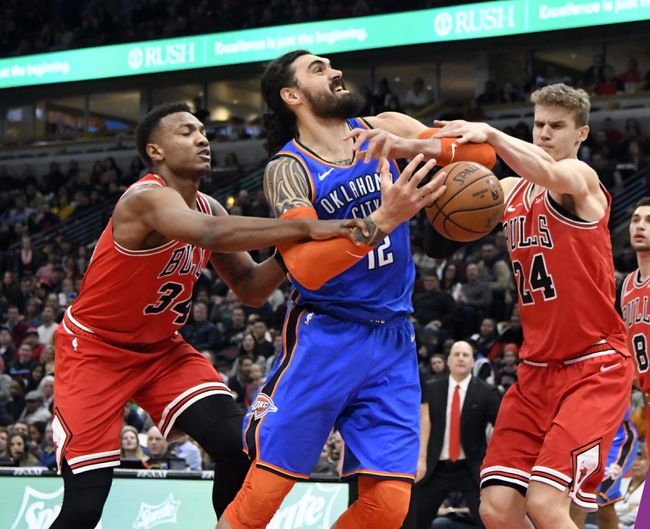 The Chicago Bulls and the Oklahoma City Thunder do battle at the Chesapeake Energy Arena on Monday night.

The Chicago Bulls have been in a real slump as they’ve lost 10 of their last 12 games but they will be feeling pretty good after taking down the Spurs in a 98-93 upset on Friday. Kris Dunn led the team with 24 points on 11 of 19 shooting, Lauri Markkanen added 23 points while Ryan Arcidiacono chipped in with 12 points and six assists. As a team, the Bulls shot 43 percent from the field and just six of 29 from the 3-point line but they were aggressive in the passing lanes and it paid off, particularly in the second half where they outscored the Spurs by 55-31. With the win, Chicago improved to 7-23 on the season and 3-12 on the road.

Meanwhile, the Oklahoma City Thunder have been in decent form as they’ve won six of their last nine games and they will be looking to stay hot after sneaking past the Clippers in a 110-104 home win on Saturday. Paul George led the way with 33 points, seven rebounds and six assists, Jerami Grant added 18 points, Steven Adams scored 16 points while Russell Westbrook racked up 13 points with nine rebounds and 12 assists. As a team, the Thunder shot 46 percent from the field and nine of 22 from the 3-point line as they cruised to victory after leading by as many as 17 points early in the fourth quarter. With the win, Oklahoma City improved to 18-10 on the season and 11-3 at home.

Head to head, the under is 5-2 in the last seven meetings and the favorite is 11-5 ATS in the last 16 meetings.

These two teams met last Friday and it was the Bulls who won by 114-112 at home in an upset. The Bulls would go on to lose three straight before pulling off the upset on the road against the Spurs so you really don’t know what you’re going to get from them. The Thunder have been one of the most consistent teams in the league and they’ve been excellent at home all season. With that being said, I like the Thunder to get the win in this one, but this just seems like too many free points.