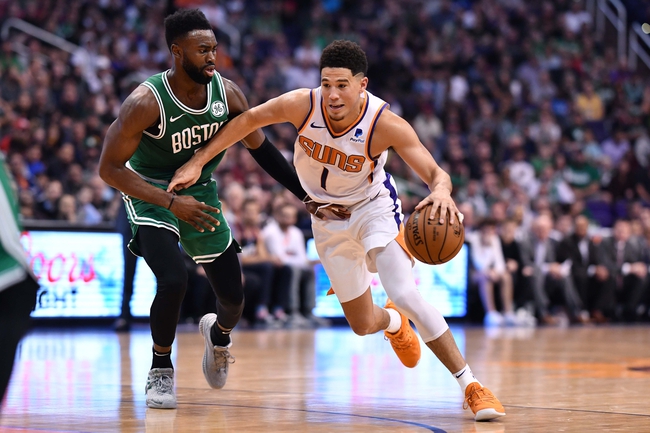 The Phoenix Suns pay a visit to the Boston Celtics at the TD Garden on Wednesday night.

The Phoenix Suns have endured a rough start to the season as they’ve won just four of their first 28 games but they’ve sprung to life with three straight wins after beating the Knicks by 128-110 on Monday. Devin Booker led the team with 38 points on 11 of 23 shooting, TJ Warren added 26 points while DeAndre Ayton chipped in with 21 points and 13 rebounds. As a team, the Suns shot 52 percent from the field and nine of 27 from the 3-point line as they toiled in the first half before taking control of the game in the third quarter where they outscored the Knicks by 41-17. With the much-needed win, Phoenix improved to 7-24 on the season and 2-13 on the road.

Meanwhile, the Boston Celtics were the hottest team in the league when they were riding their eight-game win streak but they will be looking to bounce back after falling to the Pistons in a 113-104 road loss on Saturday. Kyrie Irving led the team with 26 points, eight rebounds and four assists, Marcus Smart added 21 points while Jayson Tatum chipped in with 17 points. As a team, the Celtics shot just 41 percent from the field and nine of 33 from the 3-point line but in a tight contest, it was the Pistons who went on a decisive 13-0 run in the third quarter to pull away late. With the loss, Boston fell to 18-11 on the season and 9-8 on the road.

Back on Nov 8. It was the Celtics who won at Phoenix by 116-109 in overtime behind 39 points from Irving. The Celtics have been in great form since then and they will be eager to bounce back after having their win streak snapped but the Suns are riding a season-high three-game win streak themselves. I like the Celtics to bounce back with a solid win at home but the Suns are 6-1 ATS in the last seven meetings in Boston and I think that trend continues here as the Suns cover.