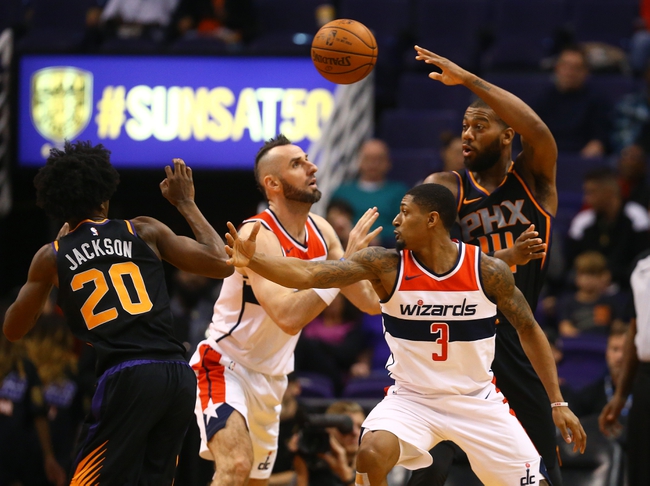 The Phoenix Suns pay a visit to the Washington Wizards at the Capital One Arena on Saturday night.

The Phoenix Suns won just four of their first 28 games of the season but they’ve suddenly sprung to life with four straight wins after sneaking past the Celtics in a 111-103 upset on Wednesday. Devin Booker led the team with 25 points and eight assists, DeAndre Ayton added 23 points with 18 rebounds while TJ Warren chipped in with 21 points. As a team, the Suns shot 42 percent from the field and things weren’t looking good when they fell behind by 12 points early in the second quarter before fighting back with a 25-7 run. On the defensive end, the Suns were great in the second half as they held the Celtics to just 41 points. With the win, Phoenix improved to 8-24 on the season and 3-13 on the road.

Meanwhile, the Washington Wizards have been in a real slump as they’ve lost six of their last seven games and they will be hoping to bounce back after falling to the Rockets in a 136-118 road loss on Wednesday. Bradley Beal led the team with 28 points and seven assists, John Wall added 18 points with 12 assists while Sam Dekker and Trevor Ariza each scored 15 points. As a team, the Wizards shot 53 percent from the field and 10 of 30 from the 3-point line but their defensive struggles were on show again as they had no answer for the Rockets who set an NBA record with 26 3-pointers. With the loss, Washington fell to 12-20 on the season and 4-14 on the road.

Kelly Oubre Jr. is set to play his first game against his former team and he could certainly get his revenge for being traded away as the Suns are in season-best form. This would usually be an easy win for the Wizards, but they've been in terrible form lately and just got blown out by the Rockets on Wednesday. It's not often that I back the Suns but  they're coming off a major upset over the Celtics and I think they can stay hot with another upset in this one.