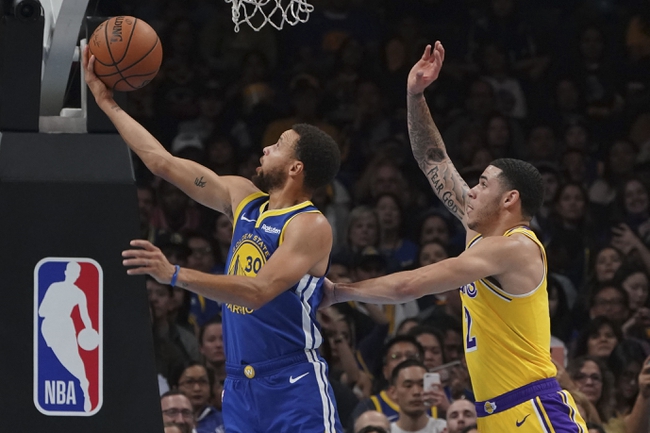 The Los Angeles Lakers travel to the Oracle Arena to battle the Golden State Warriors on Christmas Day.

The Los Angeles Lakers haven’t been at their best lately as they’ve won just two of their last six games and they will be looking to bounce back after falling to the Grizzlies in a 107-99 on Sunday. LeBron James led the way with 22 points, 14 rebounds and seven assists, Brandon Ingram added 20 points while Ivica Zubac enjoyed starters’ minutes in place on the injured Tyson Chandler and JaVale McGee and finished with 19 points. As a team, the Lakers shot 49 percent from the field and 10 of 30 from the 3-point line as they took a narrow lead going into the fourth quarter where they fell short as Mike Conley sparked the Grizzlies on a run to pull away late. With the loss, Los Angeles dropped to 19-14 on the season and 12-5 at home.

Meanwhile, the Golden State Warriors have been in great form as they’ve won eight of their last 10 games and they will be aiming for a third straight victory after sneaking past the Clippers in a thrilling 129-127 home win on Sunday. Stephen Curry drained six 3-pointers to lead the way with 42 points, Kevin Durant added 35 points, 12 rebounds and five assists while Draymond Green chipped in with 14 points, six assists and five steals. As a team, the Warriors shot 45 percent from the field and 14 of 40 from the 3-point line but this game went down to the wire, so with the scores tied and the shot clock turned off, the ball went to Curry who delivered the game-winning layup to cap off a great night. With the win, Golden State improved to 23-11 on the season and 15-3 at home.

The Lakers have been dealing with injuries all season and they’ve been extra shorthanded at the center position with both Chandler and McGee out. The Warriors have been steadily stringing together wins but they’re still not dominating like we know they can as they’ve registered only one double digit win in their last seven games. It’s tempting to take the Lakers with the points in this one, but I just get the feeling that the Warriors will be eager to earn a statement win in their first meeting against LeBron this season. With that being said, I’m going with the Warriors to pull away at home where they’ve won 15 of 18 games this season.